Ukraine force to Float Currency Because of Run on the Hryvnia

The fear of rising war in Ukraine has sent people scrambling to buy dollars. The government has now placed restrictions on buying dollars. Ukraine’s currency reserves have fallen so dramatically that the national currency, the hryvnia, is now hanging in mid-air. The National Bank of Ukraine has been forced to back off of the fixed exchange rate for they over-valued the currency and they would have been wiped out of all reserves trying to pretend there is nothing wrong. 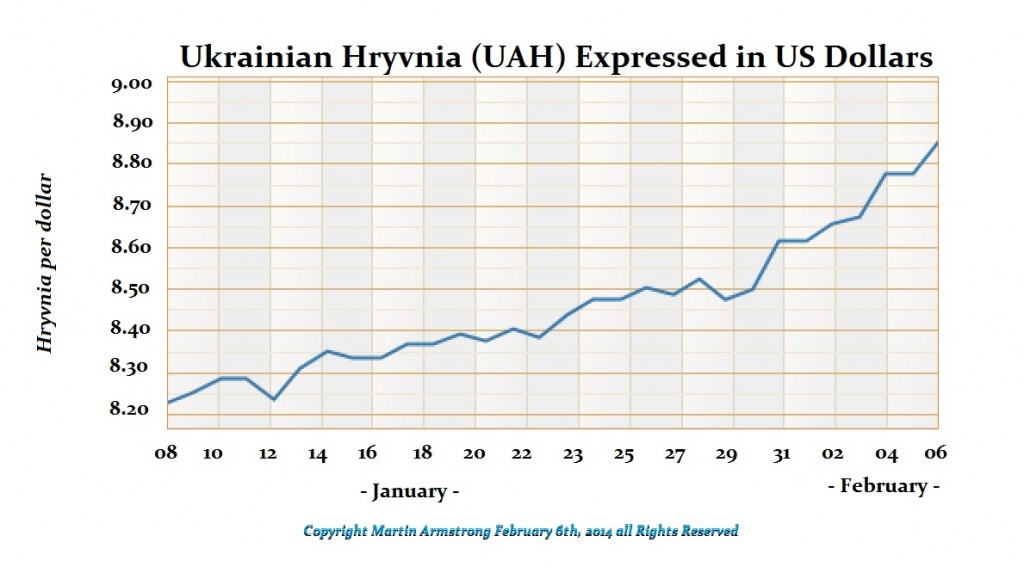 Thus, on Feb. 7 the Central Bank introduced a new exchange rate for the hryvnia at 8.708 to the dollar in what appears to be an attempt to meet the lending requirements of the International Monetary Fund. The currency will now float and that will result in a further decline against the dollar. This geopolitical crisis is reflected in the currency and is what I have been trying to explain – it is always a matter of CONFIDENCE. This crisis is also having a negative impact upon Russian banks that went into Ukraine for business before the Lehman Brothers crisis of 2008. The ripple effect in the currency markets will be profound. This will cause a contagion that will further hit the emerging markets as any conflict between Russia and the USA will accelerate into the sum of all fears everywhere.

Keep in mind, this is GOVERNMENT against GOVERNMENT. They will often portray this as people against people. I had a Russian girlfriend who was stranded deliberately in Moscow to try to get the code from me. So I am familiar with the culture and NEVER see this as people against people. Yes there is a conflict within Russia between those who love freedom and those who just want to be taken care of viewing government as the father. But those ideas also exist in the USA for there are those who always support taking the assets of those who create to support their own lifestyle of taking life easy. So to those readers in Russia, I never see this as people against people. Government taps into the same human instinct that drive people to cheer for one sports team against another. The Cold War is back – make no mistake about that.