Ukraine Elects Petro Poroshenko with 55% of What & Why 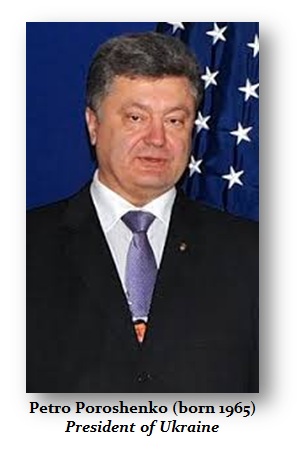 Petro Oleksiyovych Poroshenko (born 1965) is a Ukrainian billionaire businessman  known as the ‘Chocolate King’, He is now the President-Elect of Ukraine. He was elected as President of Ukraine on 25 May 2014 with over 55% of the vote, thus winning in the first round without the need for a run-off. However, our direct sources in the East state plainly they were unable to vote as the polling stations were destroyed by the pro-Russian terrorists/tourists. Those who would have voted in the East would have voted for Poroshenko because the general feeling was they needed a President who would have a majority votes with no run-offs to prevent civil war.

Poroshenko is also a seasoned politician. He has served as the Minister of Foreign Affairs from 2009 to 2010, and as the Minister of Trade and Economic Development in 2012. From 2007 until 2012, he headed the Council of Ukraine’s National Bank. He is pro-West for economic freedom.

Poro­shenko was handed a commanding victory in the presidential election Sunday, giving him a chance to resolve a conflict that has created the greatest tensions between the West and Russia since the Cold War. The fact that he is a billionaire who has created businesses rather than inherited them or filled his pockets like Viktor Yanukovych, is good for he will not rob the treasury and there is no chance of bribing him for petty cash. Yanukovych was not poor, but he was not a business man in reality.

Ukraine’s east remains caught in a torrent of violence that increasingly looks like a low-grade civil war. This is a major challenge that will test a longtime politician who has promised to navigate between Russia and the West. The fighting continues as the separatist rebellion in the Donets Basin expands.

Poro­shenko said: “The first steps of our entire team at the beginning of the presidency will concentrate on ending the war, ending the chaos, ending the disorder and bringing peace to Ukrainian soil, to a united, single Ukraine,” at a victory rally Sunday. “Our decisive actions will bring this result fairly quickly.”

He has also said he wants to lead Ukraine to closer ties with the European Union. Nevertheless, the violence that prevented many citizens in eastern Ukraine from voting, demonstrates the old anti-democratic attitude there. It is their way or no way – sheer dictatorship. Separatists in the region had vowed to disrupt the vote, and they largely succeeded in shutting that down knowing they would lose. If the would would have been for leaving Ukraine, then they would have made sure the people voted. But that was not the case. If you can’t get your way – resort to violence.

Putin said a day before Ukraine voted that Russia would “cooperate with the authorities that will come to power as a result of the election,” but he added that he continued to consider Yanukovich the legitimate president of the country. So just how much reality to this election will be recognized by Russia remains to be seen after November.

« July 1st – Death of the Dollar or Consumer Fraud?
Hollande Calls for EU to Reduce Its Role »