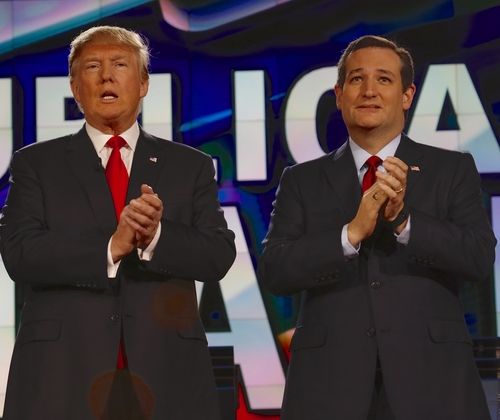 They are now playing “Born in the USA” at Trump rallies to distinguish him from Cruz who was born in Canada. The real issue that Cruz will not address head-on is the revelation in the New York Times that Cruz failed to properly disclose large loans he received during his senate campaign. Trump brought up the issue, but in a half-ass manner. Cruz quickly retorted, “Thank you for passing on that hit piece on the front page of The New York Times.” Cruz continued, “The entire New York Times attack is that I disclosed that loan on one filing with the United States Senate … but it was not in the second filing with the FEC.” Cruz even admitted, “Yes, I made paperwork errors … but if that’s the best hit the New York Times has got, they better go back to the well.”

Who gave him the loans he forgot to disclose? None other than Goldman Sachs. When you run for office, you are BY LAW required to disclose the source of your funds. It just does not cut it to say, “Oh, I forgot. Sorry.” That disqualifies you from holding office, and others have been seriously investigated for such lapses of memory.

Putting that aside, the notorious Goldman Sachs was the source of the funds. Cruz has dishonestly pretended to stand against the bankers. “Like many other players on Wall Street and big business, they seek out and get special favors from government,” Cruz told the New York Times previously. This statement is dishonest as he then pretended to forget to report a loan from Goldman Sachs. Cruz’s wife, Heidi, is a managing director at Goldman Sachs and has taken a temporary “leave” during his presidential campaign.

I am sorry, but Cruz is bought and paid for and would be in the pocket of the New York banks no different than Hillary, Bush, or the rest of them who take money from this crowd. You do not forget to report a loan from Goldman Sachs when your wife is a managing director. Come on. How stupid do we have to be to entertain this excuse?