They are Calling it a Collapse in Capitaism

The view of the American budget crisis from outside the USA is one that is blaming Wall Street and the banks and calling for the next crisis to be the final meltdown of Capitalism. This view is rising around the world. The fact that it is just pushed off into January with the funding ending on February 7th is seen as this debt crisis will merely take place time and time again until capitalism collapses. It is curious that there is a rising tide against capitalism but there is no understanding exactly what that truly means other than the Wall Street bankers. Obama is too busy trying to destroy the Republicans so he can pursue unrestrained socialism/communism and cannot see that this will destroy the world economy. It is the private sector that creates national wealth – not the state as communism proved. 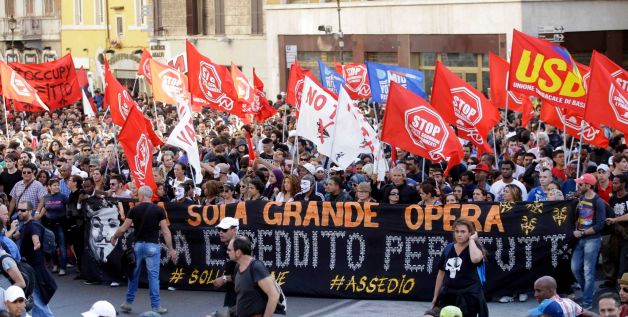 I am in Rome right now where there were major protests against austerity today. Anti-austerity protesters in Rome threw eggs and firecrackers at the Finance Ministry on Saturday to oppose cuts to welfare programs and a shortage in low-income housing. The amount of police on the streets even today are like an army and the government buildings are surrounded by police. Unemployment among the youth here is 40%+ and the future is not very bright. The entire world financial system is indeed imploding. Countries just borrow year and year without any intention of paying anything back – EVER!!! They have not figured out that this is just not working.

Governments are hunting down capital on a grand scale and now the G20 is being used to make sure that nobody will be able to have anything anywhere that is unknown to government. In Switzerland and many European nations, they have a WEALTH TAX, which requires you to report everything you own everywhere and then you pay a small tax. This is effectively a property tax on everything. Americans do not have to report what they own, only profit when they sell something worldwide. This is why the USA has solicited the G20 to hunt down what people have because there is no requirement to report it.

By maintaining the current system of borrowing and national debts, taxes become in their mind paramount. But hunting down capital like this causes it to hoard. This is in part why liquidity is still off by about 50% from 2007 levels. This is just not working and the blame will be placed on capitalism and that will be interpreted as hunting everyone down and therein lies the real economic collapse. Hunting capital will create less investment and cause unemployment to rise and then the unemployed will blame the rich and we end up heading into a dangerous path that end with a Dark Age.

Nobody seems to be connecting the dots. We must revise the monetary system, but we have to stop the borrowing and end the national debts as well as taxes. IF we do not embark on a major revision of the world economy, the only thing that will have value at the end of the day will be food.

In the USA, if you pay a lawyer you must now report to the IRS what you paid him by a 1099 so they can make sure he pays his taxes. If you hire even a cleaning people for the office and pay more than 1,000, you also have to report them. Soon, if you see someone find a quarter in a parking lot it will be your obligation as a good citizen to report them just to make sure they paid their taxes. The governments are creating an atmosphere where to earn a living other than a salary employee is just too much hassle. They cannot see that this is creating a huge incentive that expansion should be avoided at all costs for small business and Obamacare is ensuring you just better not hire too many people. Welcome to the debt vortex where reason is as uncommon as common sense.

The US budget crisis is re-enforcing the idea that we need a new non-denominational reserve currency. We will see a new one-world currency in the years ahead. It will be electronic not paper nor gold.