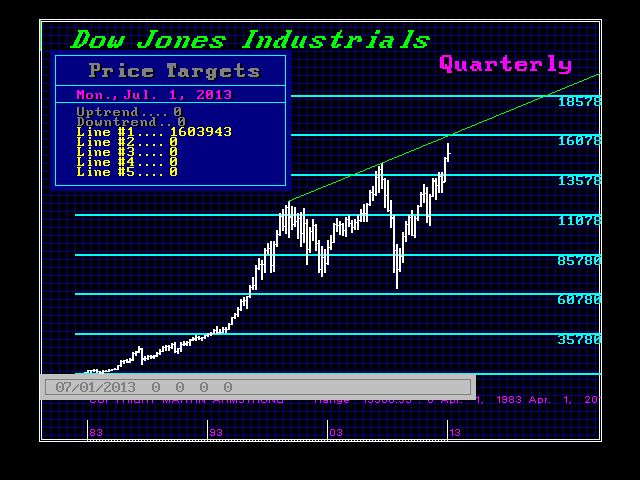 The Dow has been inching higher but has been unable to reach the major resistance area that we have outlined at the 16000 level. Many markets have reached a temporary high this week and the next two weeks will now become interesting. The fact that the Dow has backed off to some extent and has been unable to blast through to a good isolated spike high, remains encouraging for the long-term.

The Dow will be the primary focus that the Fed will pay attention to. As I have stated many times before, the only time Congress gets upset is not over housing prices or the collapse in real estate or even bonds, but the stock market that impacts their personal portfolios. Congress has been exempt even from insider trading. So it is the stock market that they focus on. The Fed will raise inter rates when the Dow starts to breakout after September and they will misunderstand the rally attributing this to investment rather than a shift in capital flows to preserve capital.

Outright investment flows have been in trouble and things like MF Global and then the LIBOR scandal only further reduce net capital investment. Liquidity is still off by about 50%. The rise in global enforcement and the hunt for Americans around the world has caused a massive contraction in investment. This by itself will contribute to the collapse in capital formation on an international scale that is historically unprecedented. Much of this collapse in liquidity has taken place because of the 2011 law dictating that any foreign entity that fails to inform the US government what an American is doing outside the USA will justify their assets being confiscated because of a presumption that the American is not paying their tax.

Then there is the surveillance of everything and everybody that is beyond description and is destroying the free investment of capital. Governments are not only scanning every piece of mail, but they are tracking everyone as they drive through massive license plate scanning, email collections. internet surveillance, banking records, and recording telephone conversations. They have wiped-out technological advancements like Skype turning that into a video recording device for the NSA. Of course we cannot forget the ability to peek into your house through new TVs, know whatever non-Microsoft software you install in a computer using Windows 8, the intent to install GPS chips in upcoming computers to help you in case someone steals your computer, and we should not leave out the chip in cars that record historically how fast you ever drove storing that in a black box. All of this is paranoia that justifies keeping track of everything and everybody is all about civil unrest in combination with the thirst for taxation – not terrorism.

All of this is having a deflationary impact as liquidity, volume, and eventually corporate profits decline. The months ahead are going to be difficult at best. This is not your everyday event that we are going to see unfold. Keep in mind that the MAJORITY must always be WRONG in order to see the major trend developments.