COMMENT: Marty; I just had to write to let you know how much you do mean to a lot of people given the stubborn goldbugs who do hate your guts it seems. I bought the stocks in 2011 with the turn in your model. I sold gold in 2011 and all my gold stocks at the same time. I bought the Nikkei for your turn as well. I too am now a trader going with the cycle and the flow. I will be at your training seminar. I can’t wait. Even your call on Japan turning after so many years was truly amazing right to the month. I now see how everything is connected. Nobody could be so right on everything from a personal perspective. You have deciphered the code of how the world functions.

The goldbugs hate you. The bankers hate you because you proven them wrong time and time again. The analytical  community tries to ignore you and main stream press are scared to death of you. What you have discovered has truly turned the world upside down. You are the Copernicus of finance. They hated Keynes before the Great Depression. They embraced him afterwards. Your day is coming. My hat is truly off to you sir.

I was a starving artist and then became a commercial artist. It taught me the economics of the trade. Now, even my children have learned so much from your public service. Thank you for such a great year. As I write this, gold is back below $1200. Some people will never learn.

Wishing you and yours a very Happy New Year 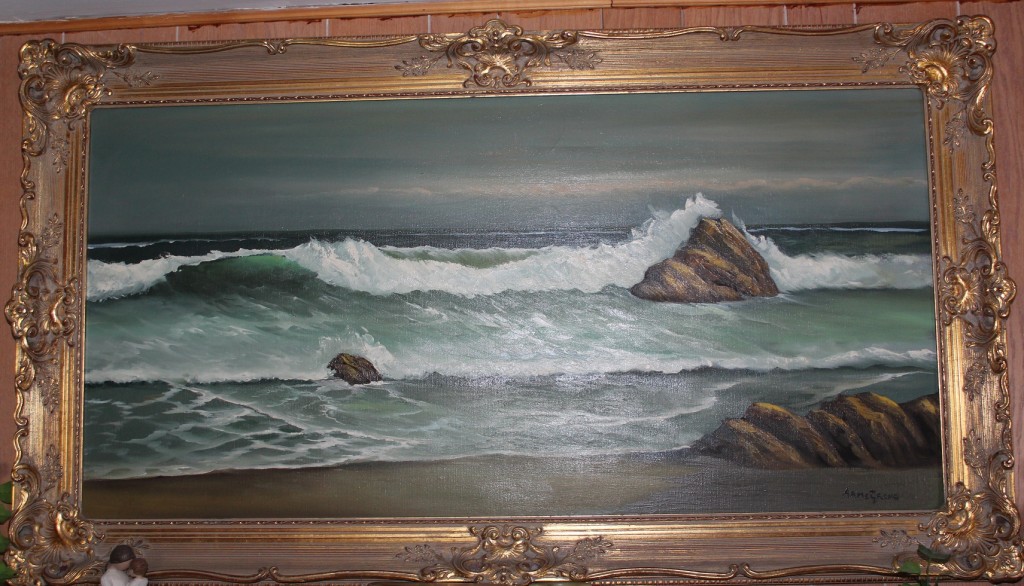 REPLY: Thank you. Never looked at myself that way. But hey – Congratulations. Yes, this has been a great year for equities and the best year performance for the Nikkei since 1972. Some people will never see the patterns that exist right before their eyes. Two people can look at a cloud. One will see a face, the other thinks he is crazy. I think being able to see requires also a creative mind or perhaps a artistic ability. I also went to art school and enjoyed oil painting. This was a painting I gave to my mother. I always relaxed painting the sea. I loved stormy scenes. Not sure what that means. It was just not boring. I too never tried the art field other than I did own an Art Gallery at one time and was involved in underwriting the lithograph trade in the 1970s. I knew Norman Rockwell and Salvador Dali, who gave me a set of wild playing cards he made. I was involved in selling their lithographs. 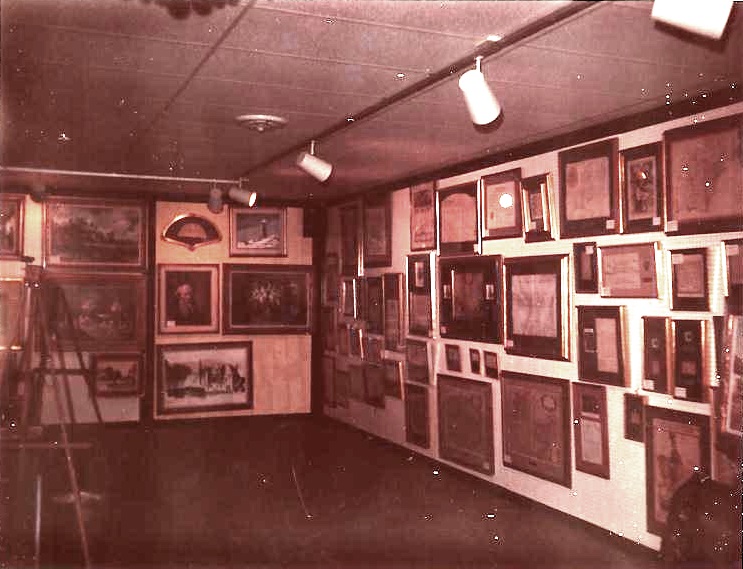 This is an old photo of my Art Gallery where I also sold autographs as well back then in 1972. I have tried many fields and at the time I thought I just could not find my passion so I would move on and try something new. Now I do see that dealing in all sorts of things from importing goods made in China, banking, metals, art, computers, real estate, collectables, and trading, they have all combined into an experience of a lifetime giving me inside knowledge of a number of industries.

Your artistic ability lets you see patterns where others do not. Trust me. It create a dynamic eye in your mind. Yes, the Wall Street Journal called me a Renaissance Man back in 2000 because of my diversity. I just always had an inquisitive mind and investigated everything I encountered. Assuming I am always wrong keeps me constantly vigilant and investigative. Hence, the old adage – never marry the trade, is precisely the key to success. Being stubborn and blaming everyone else for your failures means you will never learn from your mistakes and constantly relive the same failure over and over again. Those who are greedy and cheap only concerned about money, will never accomplish anything meaningful in life because they are so afraid of losing a penny it is like someone afraid of flying so they stay home and will never experience life in its fullest.

I was fortunate enough to witness the crash of so many markets from coins and stocks, to bonds and real estate between 1966 and 1971 as a prelude to the collapse of the fixed rate exchange system in August 1971, Those observations allowed me to see the commonality in it all – it was the same pattern over and over again. That taught me it did not matter what you traded – it all rose and fell. Arguing over what the value of the instrument should be proved pointless. It was the human interaction that mattered – not some theoretical value. There was no exception – ever.

The markets made me a trader learning to go with the flow. Keeping your ear to ground and listening to what the markets are trying tell you was the key. Instead of you telling the markets what they should be doing like Marx and Keynes, I took the Smith approach of trying to discover HOW markets moved. It was not my job to create Utopia. This is the difference between a trader and a bankrupt investor.

What I have learned is that EXPERIENCE is the builder of knowledge. You have to do it before you will ever truly grasp the subject and fully understand it. This is why people in government who have never worked in the private sector cannot understand how to manage the economy. All the money in your pocket will not make you smart. Only actually doing something allows your mind to see the subtle little nuances that exist between the cracks and every word, You have to understand things INTIMATELY.

In my research, I assume NOTHING and I always strive to comprehend the actual THINKING PROCESS at that time you have under investigation. Definitions change with time as do customs and beliefs. You cannot judge something based upon current conditions. People assumed that Greeks were pagans worshiping many gods. But investigate further and you will see that their idea of a god was nothing close to what we have in modern religions. No one looked to Poseidon or Athena as actually being their “creator”. They had a household of “gods” with each having charge of one aspect. It was Zeus who was perhaps the supreme god, but it is not clear he was even a creator. They would have sex with a mortal to create a child, but not create them out of thin air. 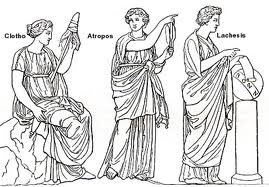 Yet to further complicate things, Zeus could judge you, but had no power to enforce it. His judgement was a “recommendation” to the three women really in charge known as the the tree fates. So concepts change dramatically where someone went to the temple of Poseidon not to worship so much as to plead for safe passage at sea. This migrated to the idea of patron saints being in charge of different things but none are seen as a creator. So it is important to understand the real thinking at the time of any investigation without applying modern standards. Trying to simply call the Greeks pagans as if all these so called gods were our vision of an almighty creator is not quite true. Their structure is highly foreign to our way of thinking. Yet it is important when you realize Aristotle influenced Marx and Keynes. You always have to truly sort through the thing process to see where the logic comes from.

Take the term Philadelphos, which was a title in Greek that meant “brotherly love” and in the 17th century they named Philadelphia for that misinterpretation of the ancient Greek assuming it was the “brotherly love” in a Christian sense. Therefore, Philadelphia uses the slogan of the city of Brotherly Love. However, it actually referred to in ancient Greek that you married your sister – quite far from any sense of Christian loving your neighbor you called brother. This is why Ptolemy II (285-246BC) who married his dominant sister Arisone II (8 years his senior) so she could really rule was known as Philadelphos as was his sister. It was an entirely different type of “brotherly love” that the term actually meant. 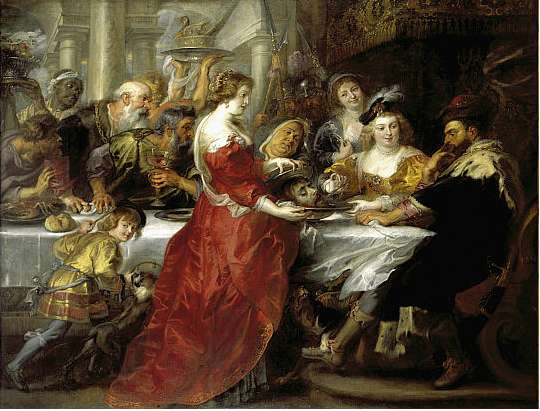 So when doing research, it is vital to honestly understand the time frame in which you are investigating. Never assume you understand. You have to prove it. This follows through to everything. To comprehend trading, you have to understand the ebbs and flows of human nature. Sounds complicated – but it is not a chart of gold, stocks, or bonds, but the rise and fall in confidence with that instrument. It is human nature that makes things boom and bust. Never the innate object under investigation. Gold ONLY has value because people like it. Trends and times change. The women painted by Rubens were always robust. Why? To be fat PROVED you had money. To be thin like models today meant you were poor and low class. With time, everything changes.

« The Majority of Analysis is Bearish in the Metals
Global Market Watch December 30th, 2013 »