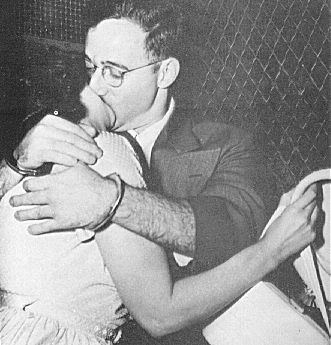 Ethel Greenglass Rosenberg (1915-1953) and Julius Rosenberg (1918–1953) were United States citizens convicted of conspiracy to commit espionage during a time of war, and were executed. They were charged with passing information about the atomic bomb to the Soviet Union. However, in legal circles, it has always been known that Ethel was innocent and that the prosecutors deliberately charged her hoping to force Julius to cooperate. The problem was that Julius was just a courier who really did not have the deep contacts prosecutors assumed. But because they were charged with “conspiracy” there is no requirement of proof that Ethel participated. The crime is just to “agree”.
A co-defendant of Julius and Ethel Rosenberg, Morton Sobell, admitted for the first time that he was a Soviet spy on his death-bed at 91, but also made it clear that Ethel was innocent. Sobell passed military secrets to the Communists in World War II when the nations were still allies, he told the New York Times. Sobell, who served 18 years for espionage, said Julius did pass secrets but Ethel, executed with her husband in 1953, was guilty of nothing more than being Mrs. Rosenberg. Details passed on by Rosenberg were of little value to the Soviets, according to Sobell. “What he gave them was junk,” he said. His revelations on Ethel’s innocence bolster a view widely held by historians. Grand jury transcripts of the case that have been released confirm that Ethel was executed on perjured evidence from the prosecution. To be a prosecutor seems to require selling your soul. You have to be willing to kill innocent people with absolute immunity. And then these people want to run for political office. NEVER vote for as former prosecutor. They cannot have any morals when victory is more important than the truth.
Snowden will NEVER get a fair trial. The US criminal justice (Just-Us) system is far too corrupt and it 99% conviction rate has surpassed even Hitler’s most notorious People’s Court that has a 90% conviction rate.