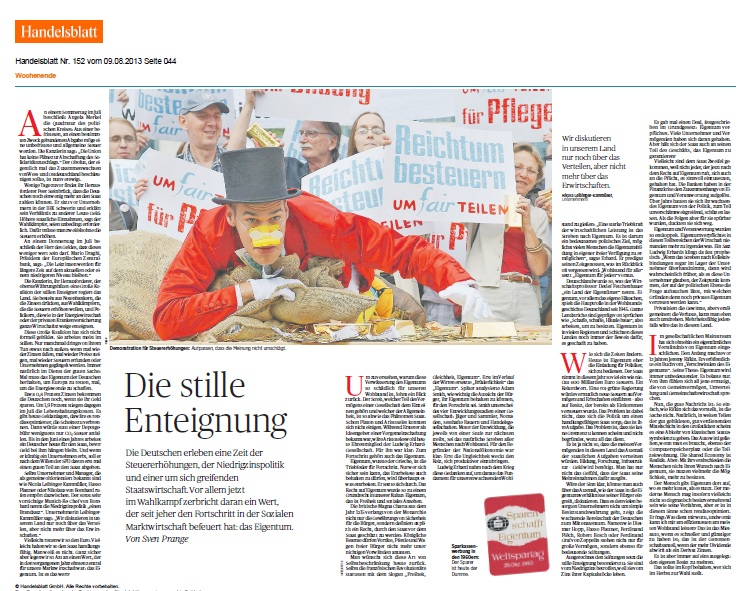 What I have been writing about may seem extreme to some Americans. But in Europe where the economic decline is in full bloom, the “Handelsblatt – Germany”, the leading newspaper on business, has come out with an article entitled The Silent Expropriation  (Die stille Enteignung). This is the most respected newspaper so it is not the lunatic fringe. What I have been writing about is starting to make the mainstream press in Germany – rising taxes and falling economic growth.

“We only discuss in this country about re-distribution, but not how to work for that money in the first place”

“We only have the power to do one thing: either we invest (and create jobs) or we pay wealth tax” (Germany wants to introduce)

Subtitle of socialist chancellor candidate Peer Steinbrueck: “Many thoughts about other people’s money” (and how to re-distribute it)

The overall tone is the rise in taxation and the confiscation of wealth. This lethal combination is destroying the economy and eliminating job growth for the future. Europe is ahead of the curve. What we may see is their economic decline sends capital in a flight to the USA going into 2015.75, then everything turns down from there and this time the fall should be faster and deeper than what we saw from the 2007.15 high. This is being caused in part by the fact that liquidity has also declined from 2007.15 and remains at about 50% of those levels. Therefore, understanding the timing will be ESSENTIAL to survive this one. You may not be able to get out if you wait for the last minute. Even proprietary trading will not be covered at the banks so we are likely to see even less trading liquidity than before or even currently.

The Handelsblatt warns that Germans enjoy only a time of Tax increases, the low interest rate policy that is threatening pension fund collapses, and a pervasive
State economy that is more authoritarian.

« What Can We Do?
Can Europe Hyperinflate? »