In ancient times, whenever there was a rise in war or political uncertainty, the human reaction was to hoard money. The hoard of ancient Roman coins 3rd century we purchased for study from Britain years ago reflected coins of both the Roman Empire and the Gallic Empire. Even the debased coinage was being hoarded. This is part of the deflationary cycle that must take place FIRST. It is the shrinkage of the money supply created by the hoarding that defeats what people assume should be inflationary. The age old problem remains the net effect – not the top down superficial theory. Watching the increase in the supply of money QE1-3 only produced massive losses. This results from the lack of understanding of the real driving forces behind the economy.

If government says it will increase the money supply by 10% and then taxes by 20%, the key to inflation is not looking at the total money supply, it is (1) the VELOCITY of money, which is the speed at which it is turning over within the economy (spending) and (2) the net disposable income. As velocity declines, hoarding rises. An asset bubble is created by a concentration of wealth in that asset class. This is the swing between the PUBLIC and PRIVATE confidence.

Currently, 29% of American households are starting to hoard cash as interest rates are so low, why let the bank hold your money? In Greece, there was massive hoarding of cash going on ahead of the elections. The hoarding of cash is on the rise and this dovetails into the record lows in retail participation in the stock market. Many people lost in the stock market 2007-2011 while the banks lost in the derivative-mortgage backed debt. Burn them once, and they look elsewhere. So retail participation in stocks is at record lows along with liquidity for historically the public will move from one sector to the other. 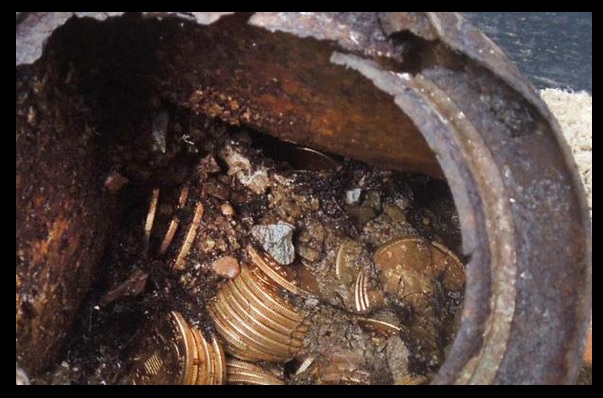 Yet real estate has risen in selected areas only because of foreign capital inflows. Then we have the bust in commodities with interest rates at historic lows. So what is someone to do with money? All that has been left is to hoard it in times of uncertainty. Above is a hoard found of US gold coins clearly deposited in the ground during the Civil War.

The Federal Reserve Bank of St. Louis wanted to know where in hell all of the money injected into the system in recent years by the Fed had gone. They failed to look internationally how China sold its long-term debt and swapped to short-term. The Fed acts only indirectly. They do not put cash into the economy directly. This again is all theory. They buy back US government bonds assuming this will inject cash domestically. They forgot that the bonds are held internationally. If they buy back US debt from China, the money goes to China, not within the domestic economy.

The standard common assumptions made by everyone concerning QE1-3 was supposed to be a shot of Vitamin C in the immune-system. The country’s Gross Domestic Product should be floating upwards on the tidal wave of dollars, with inflation soaring along with it. However, that was just not happening. The Fed’s analysts concluded that the answer lies in the private sector’s dramatic increase in their willingness to hoard money instead of spend it. That was only part of the answer. As always, they constantly just look domestically for causes and effects.

The deflationary cycle we are in is part of the uncertainty. People will not spend their money creating inflation until they are convinced that the asset side will rise faster. Japan experienced this when they were raising the sales tax. Everyone went out and bought before the hike. The deflationary cycle is in full motion. This will end ONLY when the confidence shifts and people begin not to trust government. Once that unfolds, then they will spend their money assuming it will buy less tomorrow.

So first you have the contraction (hoarding) that produces the DEFLATION, and then after that wiped out many who keep looking in the opposite direction, then and ONLY then will the INFLATION appear.

Our research was simply unbiased. The approach was I have no idea how the economy functions. Let’s just see without assuming anything to begin with. The net result was a blueprint that unfolds as a series of events with each one leading into the next. Hence, first deflation that sets the stage for the reversal. The latter is not possible without the former.