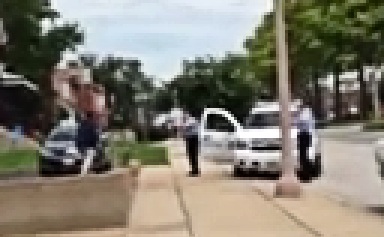 This video shows a call about a man who stole a couple donuts. He stays there waiting for the police to show up. They get there are tell him to drop a knife and just kill him with multiple shots. There is no attempt to disarm him and he is not even lunging at the police. They seem to think they have the right kill people outright. This is the attitude of police in Russia and Eastern Europe where people fear the police. They seem to be adopting the same attitude in the United States. Do as they command or they have a right to kill you on the spot.

A 22-year-old man was shot and killed last week in an Ohio Wal-Mart after failing to obey police officers’ orders to put down a bb/pellet rifle he was holding that he was buying. Beavercreek police say officers followed proper protocol when they shot John Crawford III in the store. This is the entire problem. There is no law against these police for firing multiple times and just killing people. There is NEVER an attempt to simply disarm an individual. Someone holding a toy gun in a Wal-Mart just might not understand that the police are too stupid to realize it is a toy.

Police should be disarmed. If they see someone with a gun, call a special swat team. These are police qualified to hand out tickets, that is the extent of their capabilities anymore. They seriously lack good judgment.

The United States is being exposed worldwide for its out-of-control police force and the corruption in the prosecutorial branches that boast of conviction rates that are better than 98%. The presumption of innocence is just a myth. There is no such thing.