Since the late 1990s, the birth rate is relatively constant at 1.4 children per woman in Germany. according to the Federal Statistical Office . This is effectively the same trend among all developed nations. This eventually leads not only to the fact that the population is decreasing not only in Germany but in all developed nations Russia is offering bonuses to women having children. Japan is suffering in the same manner with its birth rate plunging to historic lows. The same trend is emerging in the USA as the birth rate hits also historic lows.  Couples have to have two children just to maintain the status quo.

The birth tends to decline as a nation prospers for people do not need as many children to secure their own future. Even the Roman Emperor Augustus (27BC-14AD) introduced Family Laws requiring young men to get married for the same reasons. The peak in the Roman Empire is distinguished by the peak in population of Rome itself -180AD. This is the source of our immediate long-term economic decline as the fact that there are relatively fewer young people to support the elderly. This is clearly evident in the age pyramid. 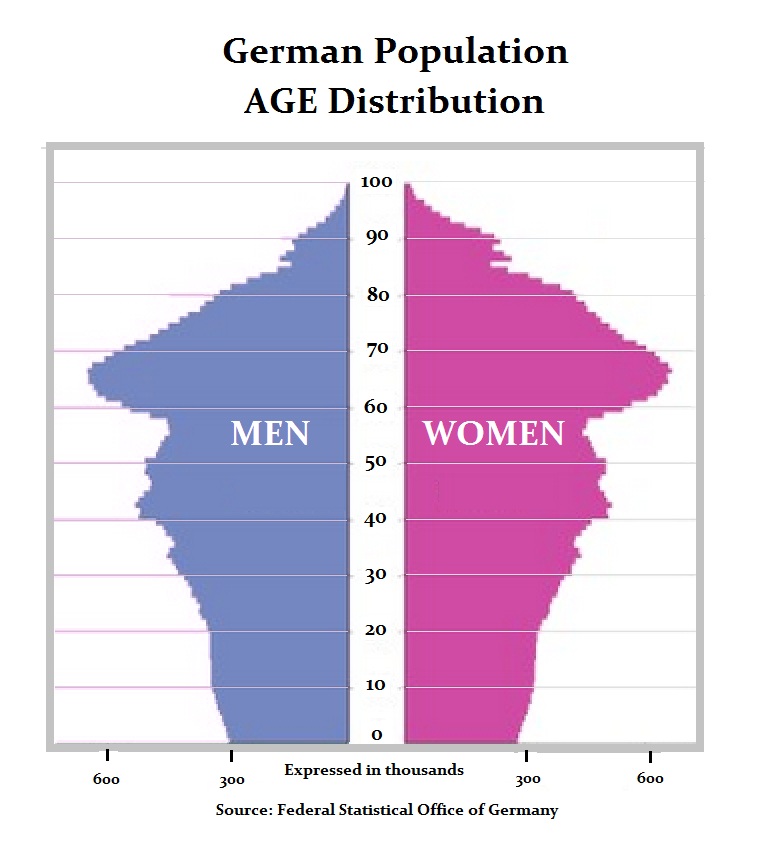 The Federal Statistical Office of Germany forecast for 2030 age structure shows relatively few young people. The old will have to tackle with a pension system that is failing. The once German retirement age of 58 is being forced to rise to 70 and the younger generation has no hope at all. This is how all developed empires have died. A nation declines as it actually becomes wealthier because the birth rate declines, and that ensures the long-term economic decline.

Then as the economy declines, the birth rate plummets because people are uncertain about the future. The minorities are attracted by the job openings and fill in the gaps during the early stages of decline. By the time of Caludius (41-54AD) the Praetorian Guard was largely German. It had been his brother who was named Germanicus following the conquest of Germany (Claudius named his son Britanicus after the conquest of Britain). Consequently, the indigenous population is consumed by the minorities that eventually become the majority. The white minority in the USA will become the minority by 2043.

The idea that the state is the guardian of the people is just absurd and socialism has helped to retard the growth rate even more rapidly as children no longer save to take care of their parents for that is the job of the state. The entire family structure has been disrupted by socialism so that productivity has been declining and future generations lacking the family structure must all work even longer than the previous. Then we have the sheer corruption of the political system as in the Roman Republic and we are seeing a significant decline int the overall. Standard of living. It now requires two incomes to provide the same standard as during the 1920s.

There is no solution to this problem for the fact that it is unfolding as it has historically done so for thousands of years is indicative of the natural course of social-evolution. The taxes rise reducing future job growth as government pension suck the life out of the private sector as 50% of revenue in Detroit goes to state employee pensions. The necessary jobs  for the future are not being created further depreciating the standard of living for the youth saddled with debt for education and nothing to show for it as unemployment in Europe is at about 60% for the youth.

It is now imperative that people will have to work for many years longer.

The low-interest policy has caused pension funds to drift toward insolvency and this is forcing more and more into high yield risky junk bonds and equities. This could result in yet a doubling of the US share market going into late 2015. Therefore shrinking both the real savings and real benefits with excessively low interest rates desperately trying to stimulate the economy is destroying the liquidity and pension funds.