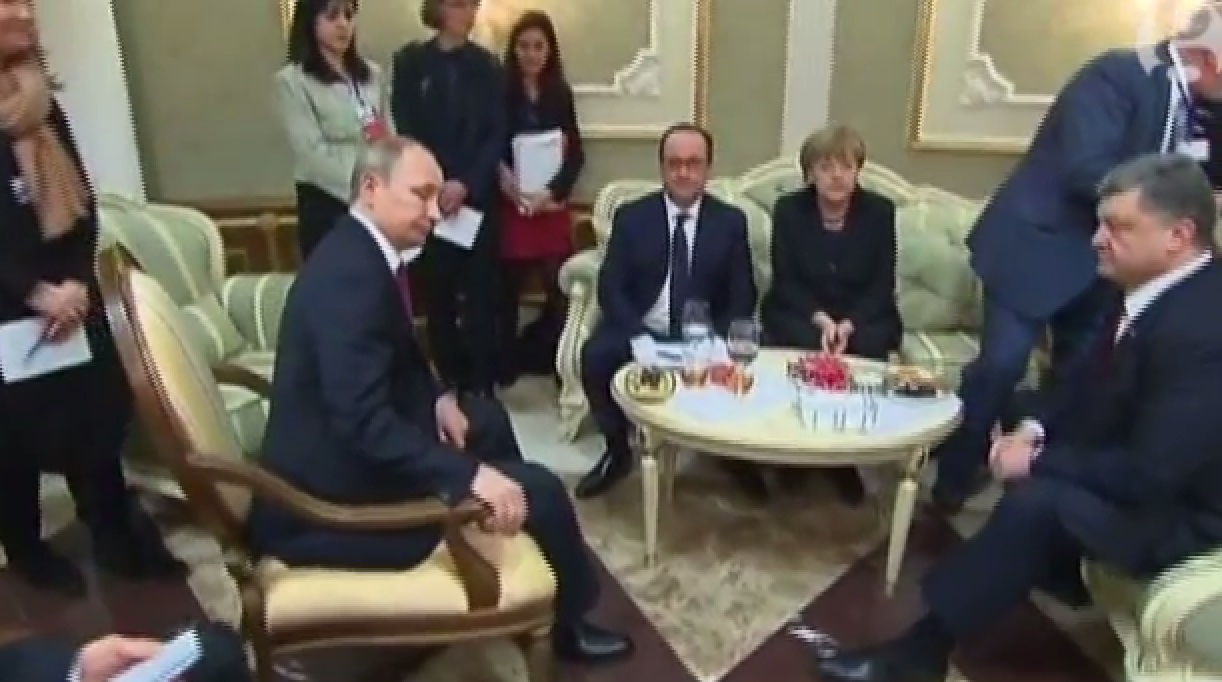 In the Belarusian capital Minsk representatives of Ukraine, Russia and the rebels from the Donbass signed a 13-point agreement on a ceasefire and other measures to resolve the conflict in Ukraine under OSCE supervision.

The essence of the plan is to take account of the self-determination of peoples, which is the reason for the conflict: the ethnic Russians in the Donbass do not want to submit to a central government from Kiev itself. The Obama Administration really opposed this sort of settlement on the grounds of old-world empire theory predicated on territorial integrity of Ukraine. Such policies have led to the death of hundreds of millions of people over the centuries..

The leaders of Russia, Ukraine, France and Germany have reached a ceasefire deal after 17 hours of talks in Minsk, Belarus, on the Ukrainian conflict.

The ceasefire will come into force on Sunday as part of a deal that also involves the withdrawal of heavy weapons from the front line.

Russian president Vladimir Putin was the first to announce the deal, saying: “We have agreed on a ceasefire from midnight 15 February.” Putin went on to say “There is also the political settlement. The first thing is constitutional reform that should take into consideration the legitimate rights of people who live in Donbass. There are also border issues. Finally there are a whole range of economic and humanitarian issues.”

Putin achieve a major political victory as the deal was brokered with Germany and France. The US did not participate and given Obama’s policies, there would not have been any such deal and Kerry, well he may go down as the worst Secretary of State in history.

In particular, the agreement provides for a truce starting February 15, 0.00 local time clock is a strictly complied ceasefire comes into force. Furthermore, all heavy weapons systems should be withdrawn 50 km behind the line of demarcation with weapons greater than 50 caliber should be moved 70 km and 140 km for missile systems. The negotiated in September boundary lines apply to the separatists as starting points. The withdrawal shall begin no later than two days after the ceasefire and be completed within 14 days.

On the first day of truce to begin talks on local and regional elections “in accordance” with Ukrainian law. No later than 30 days after the signing of the agreement, the Ukrainian parliament adopted a resolution to establish the areas that receive a special status. This should apply to those areas in the regions of Donetsk and Luhansk, who were at the time of the Minsk Agreement under control of the rebels in September. There will also be a general amnesty for all rebels. Five days after the withdrawal of the weapons of the exchange of prisoners and hostages on both sides should be terminated.

A day after the regional elections to the Ukraine again assume full control of the border with Russia in rebel-held areas. This should apply to the completion of a comprehensive political settlement, which is aimed at the end of 2015. Moreover, all foreign fighters and weapons are to leave the country. All “illegal groups” are to be disarmed. That would include American supported private armies.

By the end of 2015, a constitutional amendment is to be implemented, which provide for decentralization and a special status for areas in eastern Ukraine. As part of this reform about an amnesty for the rebels, a linguistic self-determination of the best Russian-speaking population and close, cross-border cooperation between the regions of Lugansk and Donetsk with the neighboring Russian border areas should be committed. The areas to the east should have the right to the formation of local police forces

This was simply inevitable and should have been the political solution from the outset. This idea of territorial integrity rather than the desire of the people in any region is old-world thinking that has to stop.