The HSBC Scandal – How NYC Protects the Bankers

One of the most interesting aspects of my case was the astonishing claim by Republic/HSBC that $1 billion was missing and they had no possible idea of where it went. They used that statement to seize Princeton Economics and just accepted whatever the bank said as gospel. When I appeared at the debut of the film in Amsterdam, one of the three showings was for European bankers. When the moderator asked me about that statement I turned to the bankers and asked, was such a thing even possible? The audience laughed.

There would be only one possible way that statement could be true – I would have had to robbed the bank breaking physically into its vault. Anything else would have required a withdrawal slip or a bank wire of which there was none, which in the end is why HSBC had to pay over $600 million in return for a non-prosecution agreement.

All I knew is that when money showed up missing and I called the bank asking what happened to the funds. Bill Rogers, the President of that division, slipped and quickly responded – they probably put the notes back in the wrong account. I would keep all money in Fannie Maes precisely to prevent the bank from using the money in overnight markets. Fannie Maes were not AAA and as such they could not be posted in REPO. It seems they were perhaps selling the notes and not putting entries in the accounts to hide what was going on.

Of course the mainstream press would NEVER report my allegations against the bankers. It was always a one-way reporting scheme. That is the problem in New York. As one lawyer put it best – “You don’t shit where you eat!” The corporate ownership of the press will never report the truth until there is no choice. That is why Snowden went to London knowing no US media organization would have ever published anything.

There was one NY Reporter who called me, Isabella Ring. She asked me about this allegation in a very curious manner. She asked if the bank was using my account to launder money for the Russian Mafia and Columbia Drug Cartels…

“AS THEY WERE DOING IN MADOFF’S CASE?”

That surprised the hell out of me. I said I had no idea what they were doing with the money. I assumed they were parking bad trades in the accounts and then backing them out. The forensic accountant (fcl-accountant) said that more than 33% of the trades were errors. Where they parking trades in my accounts? Or where they laundering money through them? I have no idea. That interview was squashed and it NEVER appeared most likely by the corporate editors upstairs. 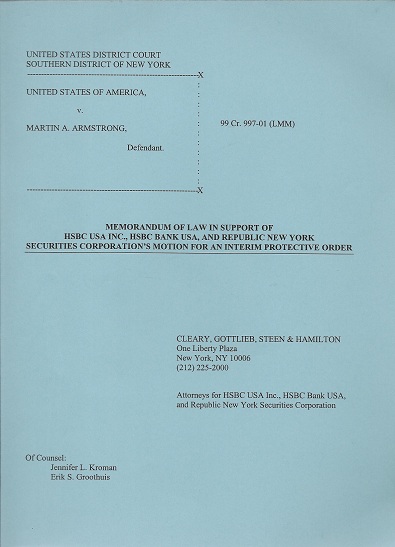 All I know is the the US government protected HSBC all the way as did the NY establishment press. If I had been guilty, under the law, I was supposed to HELP the alleged victims. I did an interview with the Japanese press who reported what I said, unlike the NY press. I told the Japanese to file suit in the New York or they would never see a dime for the banks was trying the old rogue trader routine to pocket everything. The Japanese listened and filed against the bank in NYC.

I then met with the lawyers for the Japanese and offered to help them against HSBC. Then the most UNBELIEVABLE thing happened. The government escorted HSBC into court to get a life-time GAG order on me to prevent me from assisting the Japanese who by law I supposed to help. That was just over the top.

HSBC now admits, only after internal documents were stolen and given to the French Government, that they were dealing with all sorts of criminal operations. 60 Minutes has now aired this nationally today. It is worth the watch.

And people have the guts to defend the banks and pretend they are Lilly white? When will the government just admit the banks lied to them? Probably NEVER. What my case illustrates is how NY protects the banks from the government to the press. Will that now start to change at last? Probably not. My bet, the NY press will give the worst possible review to the movie to stop as many people as possible from seeing it.

All I can say is anyone who criticizes the movie is most likely on the payroll of the bankers. For them to even do such a movie, it required Error and Omission insurance. That meant, other teams of lawyers had to review the documents discussed and the facts to sign off for the insurance company that what was revealed in the movie was true and could be supported by documentary evidence in court. So anyone taking the other side after all of that has loyalties that obviously are questionable. When I was asked to teach economics in Britain at one of the top 10 universities, I asked were they aware of my case. They said yes. “It appears to have been stitched up.” Interesting how the entire world sees through it except those controlling the media in New York City. Guess the land of the free means the land to freely cover up for the highest bidder.