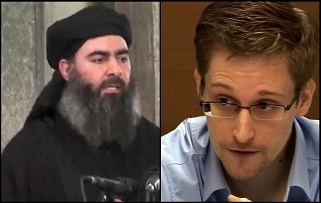 It has been known for some time behind the curtain that the best way to catch any type of protest element is to create an environment in which they will all gather together is a single place. This has been a theory used over centuries with much success.

Now Edward Snowden is revealing that this has been the strategy in the Middle East. Snowden, recently revealed that the British and American intelligence and the Mossad worked together to create the ex-EIIL or Islamic State Iraq and the Levant (Syria), according to Iranian news agency Farsnews. They have reported:

“Snowden said the intelligence services of three countries, namely the United States, Britain and the Zionist entity have worked together to create a terrorist organization that is able to attract all the extremists of the world to a one place, using a strategy called “the hornet’s nest.”

“Documents of the National Security Agency U.S. evoke “the recent implementation of an old known as the” hornet’s nest British plan “to protect the Zionist entity, and creating a religion including Islamic slogans who reject any religion or faith. ”

“According to documents Snowden, “The only solution for the protection of” Jewish state “is to create an enemy near its borders, but to stand against the Islamic states who oppose his presence.”

“Leaks revealed that “Abu Bakr al-Baghdadi took an intensive military training for a whole year in the hands of Mossad, besides courses in theology and master the art of speech.”

This is the latest from the Middle East.

This is being submitted for what it is worth.