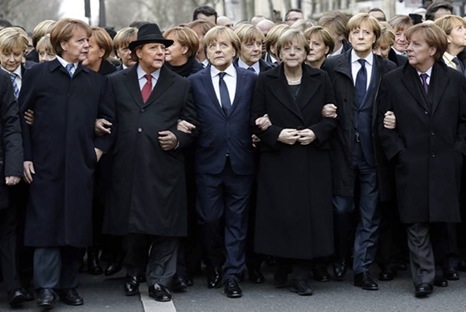 The desperate attempt to keep the Euro together is really setting the stage for sending Germany into a Great Economic Depression. Merkel now wants to raise the tax rate to pay for all her bailouts of Europe. She cannot comprehend that raising taxes to support the Euro is reducing disposable income and reducing the German living standard of the people no less fueling greater unemployment. All she looks at is trade and Germany is suffering because the system is seriously in trouble. With more than 50% of municipal government insolvent and tax increases needed to bail that out, the cost of supporting failed political theories is reaching staggering levels.

The Russian sanctions and the Euro combined are about ready to collapse the dream balloon they floated of Euroland into dust. You would think anyone with a pocket-calculator would figure this out that something has to change. Politicians  are dangerous creatures for they devour whatever exists to support their lifestyle at the expense of everyone else. They are aggressive carnivores for they will strip the meat from the economy right down to the bones. Unfortunately, they will continue on this path because they are incapable of admitting a mistake. Society always pays for the mistakes of its leaders. Therein lies our worst nightmare.

« Gold – The Hedge Against Government – NOT Inflation
Obama – Ultimate Marxist »