The FORECASTER May Become Available for a Restricted Global Viewing

Is there any way to purchase the movie The Forecaster directly? I would love to see it and am a follower of Mr. Armstrong, receiving some of his reports that came out while he was still in jail.

Sent from my iPad

REPLY: This movie was funded by several TV stations in Europe and they spent about 3 years in production flying all around the world to interview people. The debut has sent shock waves all the way to Moscow where there are requests to show the movie immediately.

We have no position in the movie and receive no revenue from it. So we have no ability to show it or sell it. The producers are well aware that this may be the biggest documentary film on the demand side ever created. They are in discussions to perhaps do an online restricted viewing to our readers who really do not want to wait. They realize the investment community wants it now and the general public are another market. Trying to satisfy both is not an easy task.

The producers had to negotiate that with distributors who naturally want this for the theaters around the world. They were even trying to coordinate a global debut the same day. But that would take amazing coordination.

Nevertheless, I believe there will be some accommodation for the investment community. But this will be restricted because of the people lined up to distribute this film naturally want the biggest market. It will be on TV in Europe probably by next October.

This is a film about my battle against the Club that is protected by the NY courts and the US government. With all the fines being paid for manipulating just about everything, when I stood up in court back in 1999 they said this was absurd. The banks would never act in such a manner. Boy, what a difference 15 years make. 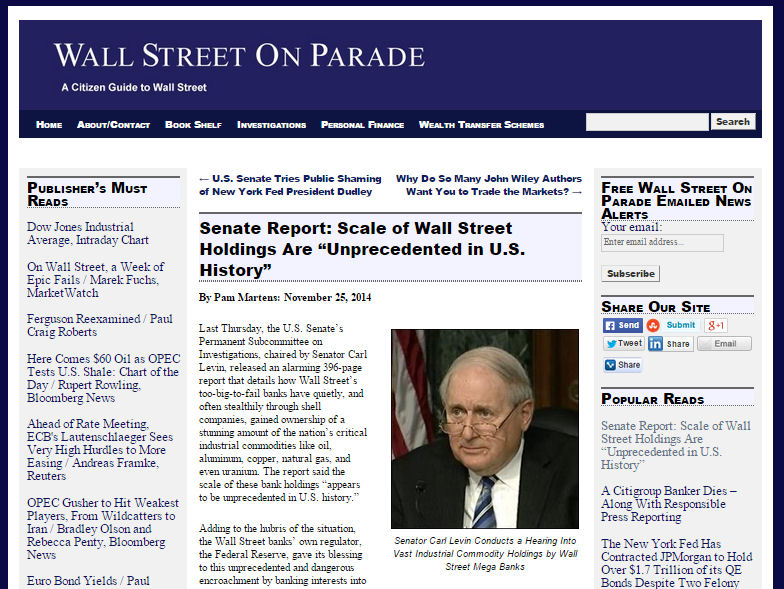 All of a sudden, faced with this movie that exposes the deep corruption of manipulations, we are starting to see movement. The Senate just released a 396-page report that details how Wall Street’s too-big-to-fail banks have quietly, and covertly acted in a stealth-manner through shell companies to gain ownership of a stunning amount of the nation’s critical industrial commodities like oil, aluminum, copper, natural gas, and even uranium. The report said the scale of these bank holdings “appears to be unprecedented in U.S. history.” This was precisely what was taking place with the attempt to take over Russia to control oil, platinum, and gold just for starters. The “Club” has sought to manipulate the markets to achieve the “perfect trade” and this is how they have blown-up every time.

The CFTC announced an investigation into manipulation by Goldman Sachs, Morgan Stanley, and JP Morgan. I suspect you will now begin to see investigations becoming more common.

I hope this film pushes the political pressure for change. The ONLY way to have accomplished this was from the outside-in. The resentment against NYC is so intense outside the USA that this is why I agreed to do the film only with Europeans. I simply could not trust any American firm would be able to stand up against their contrivances to kill the film.

We have to take back our future for ourselves and our posterity. What has been going on is WRONG and it places in danger the economic stability of the entire global economy. Enough is enough. We are now talking about confiscating people’s lives to save banks that have been very bad traders to say the least. Just how are we to survive here? We are not headed into hyperinflation nonsense. This is massive deflation with the collapse of pensions and savings on a grand scale unseen since the collapse of Rome.