The Fallacy of Comparisons 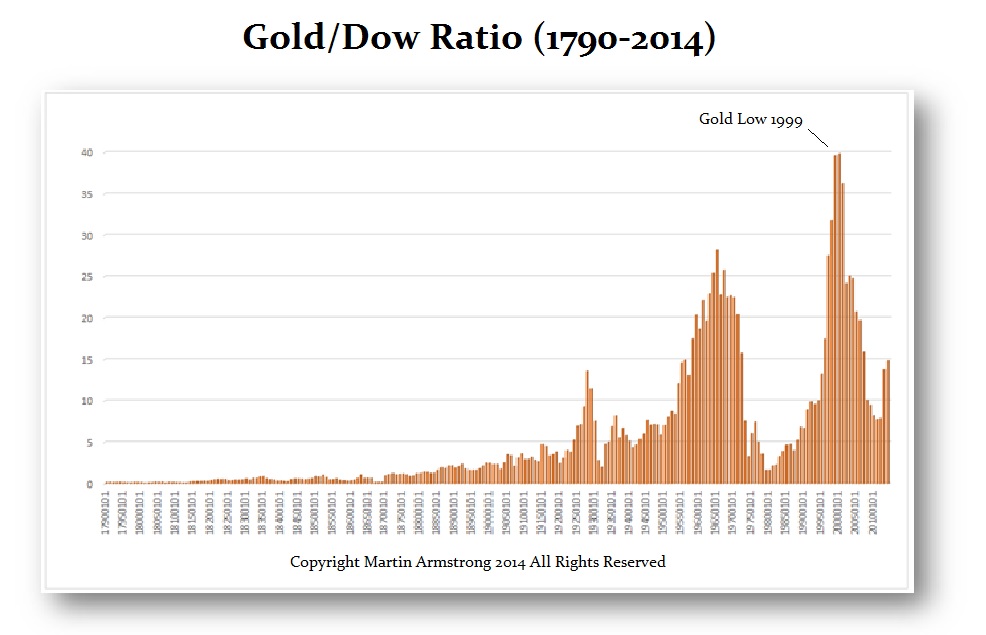 QUESTION: Marty, are ratios ever really a valid means of judging value? It seems like that is always the argument to buy. I saw that in 1980 with silver and gold. Now it seems they tout the Gold/Dow Ratio. All I have ever done is lose money on these claims. Any guidance here?

ANSWER: It really does not matter what instrument people try to relate. They also try to claim something is cheap or over done based upon some ratio. The Dow/Gold Ratio simply shows like everything else that there are wild swings. The high in the ratio was obviously when gold bottomed in 1999. The decline in gold now is a normal correction process not some drastic altered state. In 1980, the ratio fell to 1.63 and in 1999 it rose to about 39.8. The last rally only saw the decline 7.73 – nowhere close to the 1980 level. This makes perfect sense since gold in real terms has not exceeded the 1980 high despite the claims it is a hedge against inflation rather than a collapse in confidence.

The same problem exists with the Silver/Gold Ratio. I remember the sales pitch back then silver would rally to 16:1 because that was were the official ratio used to be. Gold they said would double going to $1600 and silver $100. Of course, gold peaked at $875 and the Silver at $54.

I do not care what we are talking about – ABSOLUTELY EVERYTHING fluctuates. There is NO guaranteed trade or else the bankers would not require bailouts. Everything moves and nothing remains constant. This is why Communism collapsed and it is why currency PEGS do not last. That is just the nature of everything.