The Euro/Swiss Has Been Warning The Peg Could Not Hold

At the Berlin World Economic Conference I delivered the same forecast we gave to the Swiss – the EURO/SWISS PEG COULD NOT HOLD.  Indeed, its lasted about Pi 3.14 years before the pressure really built and 3.3 years it cracked. Who is to blame? The Swiss? Or does the blame belong to Brussels and stupid traders/investors who hopelessly just believe whatever government and the non-free political-correct press that allows society to be destroyed by politicians they fail to keep in check? 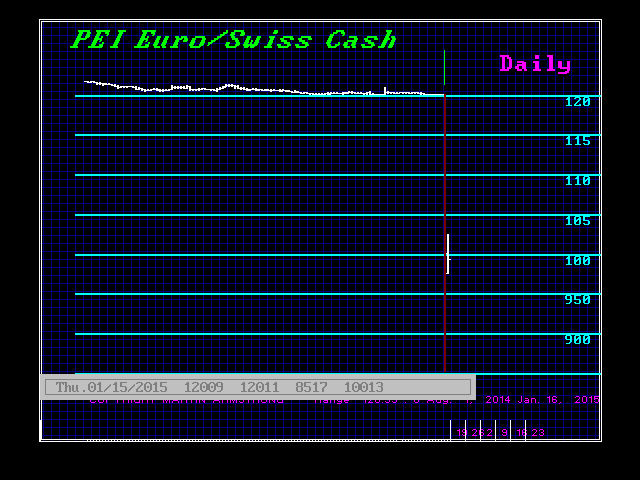 The Euro collapsed against the Swiss falling to 8517. This was a historical decline and at first glance one would think this was a bad tick gone way out of bounds. So how do we analyze such a new historical move? You cannot approach this with a view of the whole. 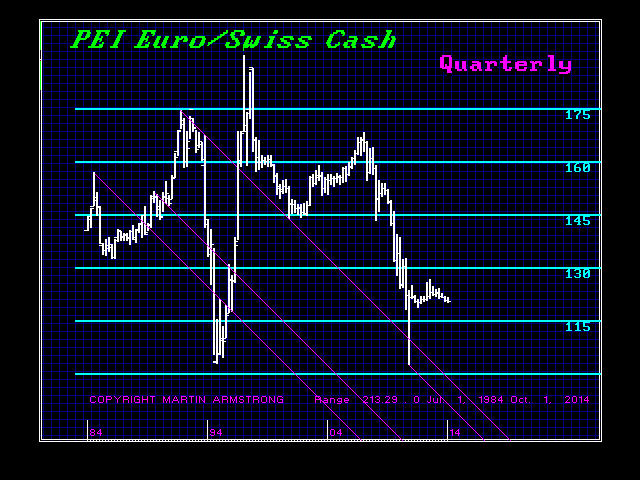 Here we have the Euro/Swiss recreated back to 1984 when the just before G5 began in New York at the Plaza Accord. You always need a map even in markets. How can you figure out where you are going if (1) you do not know where you have been and (2) you do not know where you are right now? This pattern shows that we have now broken the double bottom I warned had to give-way. That has now been accomplished. So yes, the Euro/Swiss collapsed to historic lows and the Swiss ought to run out and buy whatever they can while the Swiss in strong.

When I was called in by the Central Bank of China because of the Asian Currency Crisis in 1997, we were stating that the capital flows had shifted and were heading back to Europe in anticipation of the new Euro in 1998. We produced charts of the capital flows and recreated the Euro synthetically to show what was going on. There were members inside the Bundesbank at the time who were leaking to us anything to do with the construction of the Euro because they too read out analysis and were bearish of the idea of creating the Euro – today, they have been proven right. Yet because Princeton Economics was really the only major forecasting firm in the world who was NOT politically-correct and call the shots as they stood, the press has touted the analytical forecasts of the big banks, but the really players relied upon Princeton. By doing this, the media empowers politicians and the truth never surfaces until the crisis unfolds. 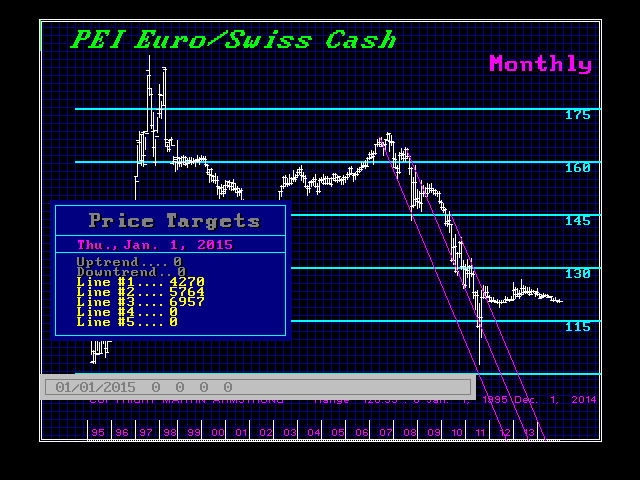 Now look at the channel created by the break-line. The steepness of this channel has been warning that such a move was REASONABLE because the manipulation trying to keep the Swiss down at 120 was insane. Clearly, the fault belongs to Europe – not the Swiss. The Swiss have been trying to prevent the inflows fleeing Europe. Pegging to the Euro was not very smart. This could not possible survive and this chart proved that conclusion. The Swiss kept trading at the peg with no BOUNCE. This made it a perfect trade for anyone who was smart. I could swap Euros for Swiss and if I was wrong they gave me my money back. If I was right, then I would make a fortune. It was like going to a casino and gambling. Every time I lose, they give me my money back until I win. Pegs are the child of academics and lawyers who do not understand that free markets ALWAYS win in the end. The free markets wiped out Communism and they are now destroying socialism. As always, the politicians only seek to defend themselves and not the nation or the people.

There was ONLY one possible way for Switzerland to have prevented this. They had to create a Financial Swiss Franc for foreign capital to park since the problem was the flight from Euroland. A two-tier currency was the ONLY possible solution to hold the capital inflows. Milton Friedman criticized the Fed during the Great Depression for not creating enough money. The inflows were in the form of gold bullion and without coining it or using it to issue more paper, they created by default a two-tier currency and propagated domestic deflation with the shortage of money. Gold became a second currency that was not monetized and just sat in reserves. The Swiss needed to create such a currency to deflect the inflows from their domestic currency supply.

Hundreds of cities in America began to issue their own local money because of what we would call today – austerity policies. Had Switzerland adopted a two-tier monetary system where capital could park, then we would not have had the move we did this past week. Nevertheless, the fault is NOT Switzerland, it is the stupid idea of trying to create a single currency without a singe debt that has produced the fictional land we call Euroland. 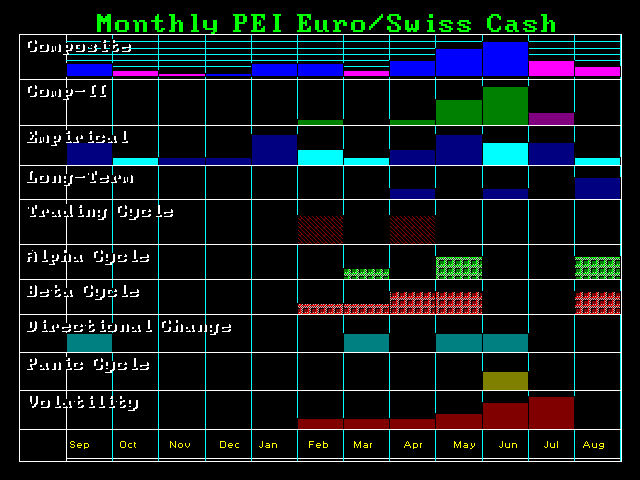 We have been warning that January was a major target in TIME. It has been showing up for the last 9 months. Here is the Array on the Euro/Swiss from last September. We can see the long-term pointed to January 2015, but then look at the distinct rise in volatility implying the PEG would not last. June 2015 has been showing up as a Panic Cycle in many markets. The start of a new trend in volatility has begun. More and more serious money will start to look closely at Euroland. This is the start of Big Bang.

So sorry – the fault does not lie with the Swiss. The fault lies with Euroland. As for those banks complaining they lost a fortune, well that’s what yuo get for listening to bullshit.