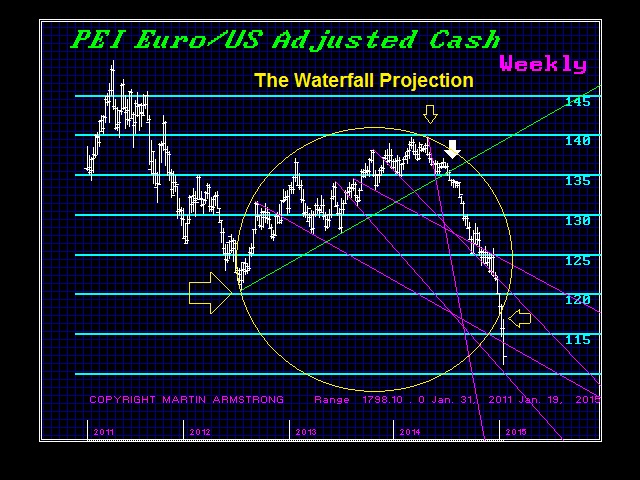 We have not seen a Waterfall Projection on any market in years. All of a sudden, it showed up in Euro and in Oil. Those who have been with us for decades will notice that the projection for the high was virtually a perfect formation at the top of the circle based upon the Pi derivative. That meant we should have then stayed within the circle forming that sharp curve (Waterfall) that will then rush to the bottom of the projection. Note we fell and supported perfectly on it, bounced for one week and then fell out of bed pushing through the bottom of the Pi Cycle projection. You cannot get any more bearish than that for the future long-term. 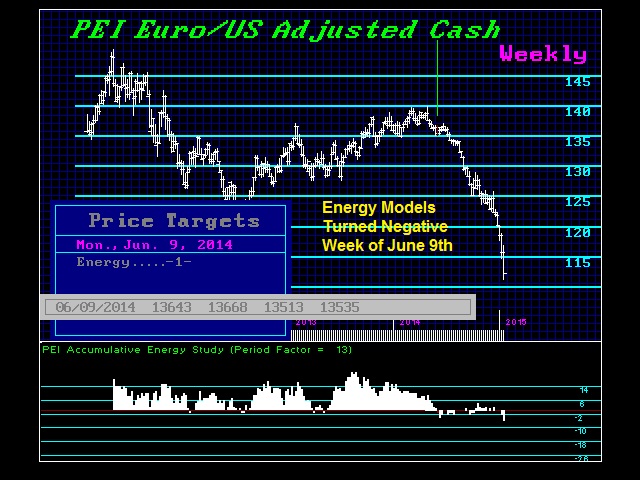 The confirmation that the forecast would be spot on came the week of June 9th, 2014 when the Euro turn NEGATIVE on a Energy models. The inability to mount a recovery warned that the Euro was in a real FREE-FALL to complete the Waterfall. Then there was the technical break of the Uptrend Line (green previous chart). You just could not provide a clearer signal that collapse was eminent. 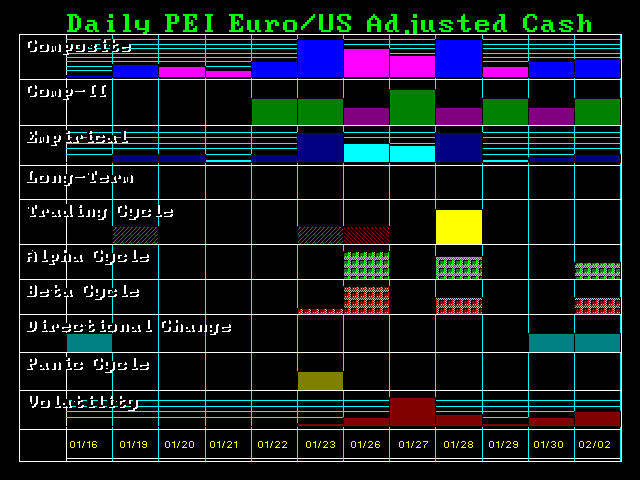 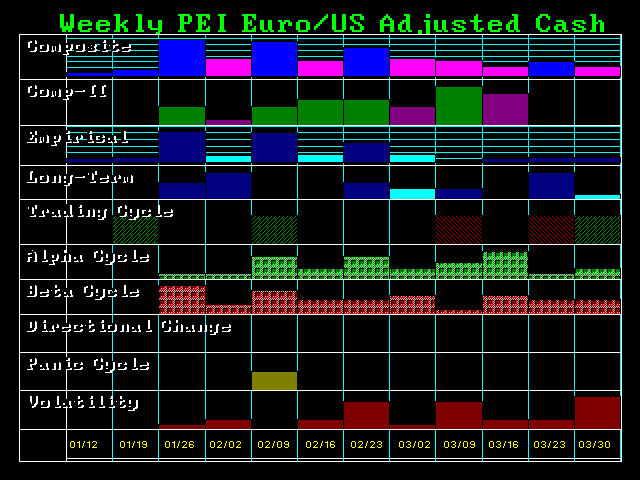 The fascinating aspect about Socrates is how it picks wars and political elections that are reflected in the price movement without any fundamental analysis. Tomorrow, we have Judgment Day – the Greek elections on Europe.

If the polls are accurate, Greece is on the verge of electing the first anti-austerity party in the Euroland. If that happens, Greece’s future will once again be uncertain and we can bet on increased volatility in the months ahead. Our model is warning that there are critical points here. A simple yearly closing below 116 is confirmation of a bear market. Then our targets were 113, 105, and 85. The collapse to 1.1115 with the closing at 1.1209 was longer-term bearish. However, this does not imply a further immediate collapse. A closing below 105 was needed for that.

But the election will be judgment day on how Europe will survive long-term. This financial and economic crisis is the result of academics and lawyers assuming that power can merely dictate to the free markets. Sorry, the Russian had to figure that one out for itself. Centralized government economic planning just does not work. Their own self-interest prevents economic management from working.

The Greece has been bailed out with €240bn (£188bn) from the EU, the ECB and the IMF. But the economy has shrunk by 25%, unprecedented in the modern era. Why? Because these morons just have NEVER understood currency and capital flows. Converting the pre-Euro Greek Debt to euros that doubled, caused their national debt to double in “real” terms and then they suddenly have seen their economy strip-mined. If the Greeks do not pull out of the Euro, we will see civil war erupt there by 2017.

Many Greeks believe they have been assigned to a laboratory for austerity. They despise the Germans and rightly so. The Germans remain fighting their last nightmare – hyperinflation. They do not understand what took place back then and simply assign its cause to an increase in money supply. That was the simplistic stupid analysis of one dimensional thinking. The German Hyperinflation was caused by a revolution in 1918 where Communism was infiltrating from Russia. Capital fled NOT because of money supply increases, but because of the treat of capital seizures. The money supply increase came as a consequence of the capital flight. This is like assuming everyone who ever eat a carrot died eventually so the cause must have been the carrot. It was a 100% correlation. The get their timelines messed up and cannot see the truth no matter what, Just astonishingly crude analysis if you can even call it analysis.

Greek Prime Minister Antonis Samaras, when in opposition, was mistrusted by Brussels and Berlin. He doubted whether cutting spending in the middle of a recession would work and resisted signing up to it. He was absolutely correct – Berlin and Brussels are seriously wrong to the detriment of the entire world.

In power, Samaras has essentially followed the script of the so-called Troika; the EU, the IMF and the ECB. This has proven to be BRAIN-DEAD and Europe is facing Judgment Day on a grand scale not seen since World War II. This is perhaps the greatest fiasco in modern history of the worst possible fiscal mismanagement in recorded history. Thus, the Euro is at risk of extinction long-term as it will promote separatism and civil war. This is not personal OPINION, this is the correlation of history. Sorry – Europe is going down in flames because of crazy lawyers and academics who do not know the first thing about running an economy.