The Euro For Next Week

The Euro closed on Friday still in a short-term bullish posture on a weekly basis as we head into the week of 06/17, which is the next turning point. The primary resistance stands at the 13432 level on the cash. It will now take a weekly closing back below 13147 to signal a retest of support. On the monthly level, the primary resistance stands at 14280, 14380, and 14580 followed by 14700. The Monthly Turning Points are July and September. As it stands right now, the Euro is basing and could press higher into July for the ECM. If it makes a high at that time and September is showing up as a key target that also lines up with the German elections, this are likely to get interesting. Volatility will start to rise in August, and then we see big volatility in January. 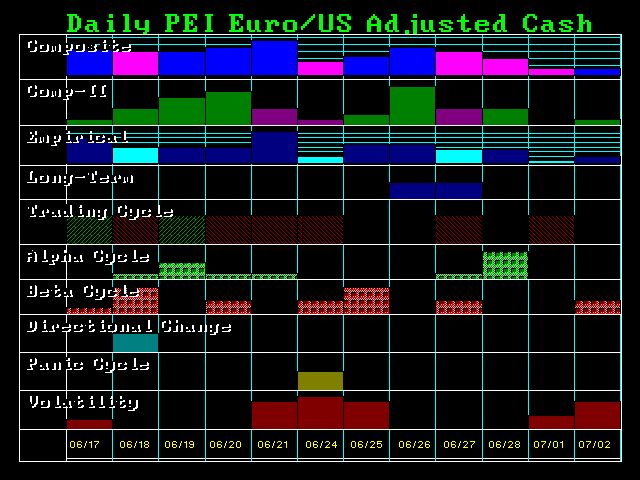 Here is a view of the daily level. While we have a Directional Change on Tuesday, note the turning point on Friday with high volatility early next week. The Friday closing warns that the chaos with the dollar is not over just yet and is clearly being impacted by the entire NSA scandal.

The aggressive nature of the USA turning into the worse secret police state in history, is having some short-term impact against the dollar as people begin to question the whole US forum. They are censoring content, threatening companies, and illegally demanding everything right down to DNA now from people arrested for anything. NY City has imposed a “Stop and Frisk” policy and is using it to target minority youth even on their way to school. The whole Verizon scandal is being DEFENDED by Congress. Seizing every single phone call and then storing them in Utah forever is beyond contemplation how any politician can fail in their duty to defend citizen rights. How is this protecting against terrorism when you are collecting everybody’s emails and phone conversations and storing that forever?

Verizon’s ads Can you Here Me Now was obviously intended for the NSA. The government let a drug dealer go free after he agreed to set up Google. The sting operation opened the door to force Google to give up everything and what they did to Google is then flaunted to others to say cooperate or else. The DOJ charged Google with facilitating the drug trade and that under the law legally meant the government could seize the entire company under the Drug Forfeiture Act and shut it down. They do this to everybody. If you rent your house and the person who cooks drugs, the Fed can seize your house. The fact you are innocent is of no consequence. They get your house and you are out of luck. In 2000, these forfeitures were getting so out of hand they seized even hotels. They had to pass new legislation to create an innocent owner defense but you have to prove you are both innocent and the owner. Google would not have applied and the Feds could have just taken the entire public company and that is the law.

The Department of Justice threatened Google to spy on everyone and in return they would not seize the company but only fine it $500 million. This is how they operate. They set people up and then turn them into spies just as the Stasi did in East Germany – the same MO. Threatening even the press criminally in the USA for reporting the truth is becoming very common. This is why you CANNOT rely on mainstream press and it is why Snowden had to turn to the Guardian in the UK. The USA cannot seize that newspaper and it cannot threaten those reporters for not paying taxes. Even Wikipedia has become a tool for the government.

So the dollar remains under pressure as everyone begins to sift through the dust after the NSA has destroyed the basis of economic interaction. Back in March 2013, Wired Magazine published what has been talked about behind the curtain for some time now and was behind our decision to move everything to Switzerland. The Wired article predates Snowden’s revelation that it took the UK Guardian to report since no US newspaper would have dared revealed the truth for fear of being charged like Google and shut down.