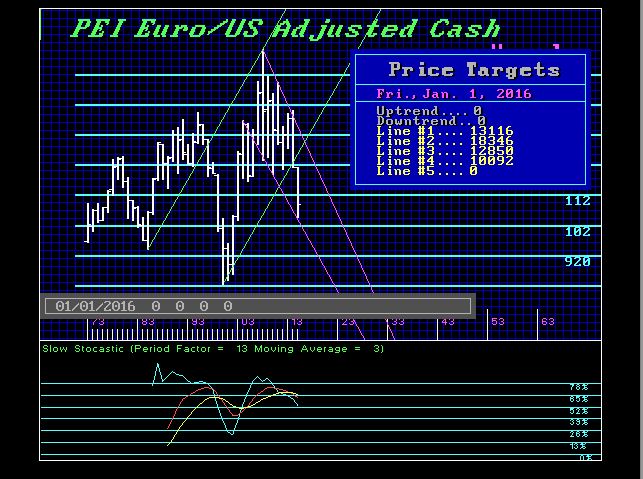 The closing for the euro at 10869 provided the long-term Yearly Bearish Reversal that we have cited throughout the year: “We have Yearly Bearish Reversals at 11645 and 10365. So the 116 level will remain as reactionary resistance this year and the 10365 level is key support just below the current low of 10460.”

The 116 level remains the reactionary resistance target. That is what we should look at for any rally if we are looking to sell this currency. Nevertheless, we do have an initial Weekly Bullish at the 11055 area and a small gap up to the 11365-11375 area. It may be difficult to get through that level of resistance. 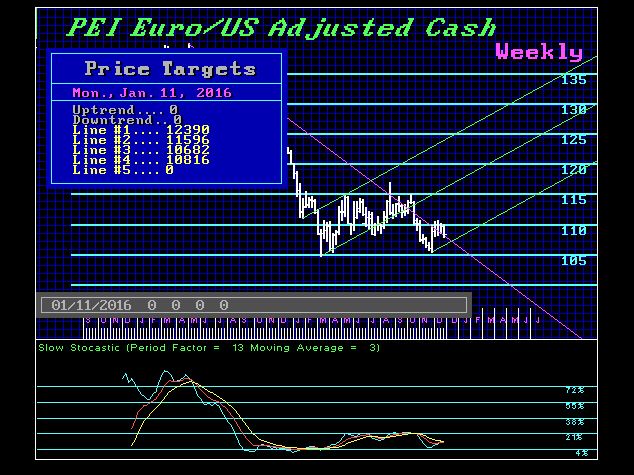 We can see that the oscillator has showed a recovery to some extent. We have not achieved any of the sell signals so far. We still have the Weekly Bearish at 105.20 so we have seen nothing but consolidation to date.

The fact that we closed 2015 below the 116.45 Yearly Bearish Reversal confirms that the trend is down long-term. We held the major Bearish at 103.65, which signaled that we may not see an early conclusion to this trend either. So here too, we may not see a low in the euro (high in the dollar) before 2018, at best, with the potential for an extension into 2020/2021.

In the stock markets, crude, the euro, and the Chinese economy are looking into 2020 and the potential that Japan will collapse into a full Pi Cycle of 31.4 years from the 1989 high, which would also put this into the 2020 time slot. We must keep an eye on the War Cycle that heats up in 2017. Such periods of conflict, on average, last about three years for a single nation. World War I lasted 4.291 years (about half of an 8.6-year cycle), and World War II, when combined between Europe and Asia, lasted 5.953 years. Therefore, if we were to see an international war from 2017, one would expect it to end by 2021. This War Cycle also has the domestic civil unrest component hitting it simultaneously, and appears to rise sharply following 2017 during the year of major political change.

Therefore, the markets appear to be telling us there is an extension in the wind when we look at all of them across the board. Gold also avoided the key sell signal at 1044 for the closing of 2015 and bottomed on the first Benchmark. This too was like crude — not a buy signal, just an avoidance of a near-term sell signal and hence the bounce. Nevertheless, unlike crude which elected a Yearly Bearish at the 41 level that warned of no new record highs, gold has never elected a Yearly Bearish so new highs remain on the horizon moving forward.

Everything is starting to imply that this is NOT going to END in 2017, however, it is starting to appear that this will be the BEGINNING of the end. So we still see that the opportunity to sell the euro will arrive as will the time to finally buy the Dow. Neither have given us a signal just yet, so it looks like we may get to sell the rally in the euro and buy the low in the Dow.