The Age of Disinformation – Hiding Truth in Plain Sight 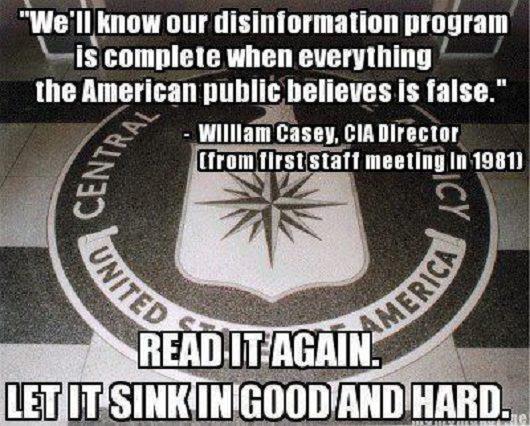 QUESTION: Mr. Armstrong; I listened to your discussion with Glen Downs. You said that the first golden rule of disinformation is to exaggerate the event. Can you elaborate on that?

ANSWER: This is standard operational procedure and it is why I am very skeptical about conspiracy theories. Trace the origins and you will find that they are generated as part of a plot to hide in plain view the truth. Take 911. There are now people who claim that there were no planes at all and it was all staged. There were planes – I was there and saw them. I felt the building shake upon the first impact. I stated that the terrorists from the First World Trade Center attack drew the twin towers on the wall in their cell BEFORE the event. The Feds knew what they were up to and allowed it to happen and used it to their advantage. There was plenty of confirmed evidence that they knew what would happen. Did then stand back and allow that to happen? Most likely. How do you cover that up, you simply exaggerate everything to destroy any credible investigation. This makes anyone who question 911 a conspiracy nut job. Perfect cover to hide the truth right in front of your eyes. I will get a slew of emails swearing I am wrong and the whole thing was a CIA plot. They cannot see that this argument goes nowhere. It is like the one claiming there is no gold in Fort Knox. Big deal. Prove it! Until the government falls in some sort of revolution allowing access, it is just rhetoric that discredits to speaker.

I question both the collapse of WTC7 and the Pentagon and the plane that crash in Pennsylvania was probably the one headed to the Pentagon. What hit the Pentagon does not appear to be a plane. So how do you cover-up what is in plain sight? The oldest trick in the book is disinformation. You create the controversy centered around the Twin Towers and exaggerate the claims. The majority will begin to see through the exaggerations as a conspiracy theory and stop there never looking further. The intentional attacks by the government on WTC7 and the Pentagon are no longer investigated or looked at for they are painted with the same discredited view of the Twin Towers. People will get so intense that the Twin Towers had to be a US plot, that this acts as perfect cover for the real issues.

Why people are so bent on the entire thing being a conspiracy instead of seeing that at the core there was a real attack usurped by the Feds who used that attack to cover-up and expand the government may be government disinformation. That remains the real agenda and by exaggerating the claims on the Twin Towers, they render the entire subject as a conspiracy theory and hence you have hidden the real issue in plain sight. Insisting upon the entire 911 was a conspiracy GUARANTEES there will never be any serious investigation and the real issues will remain un-investigated. Yet people will insist I am wrong and I have to wonder who is being paid to put out such exaggerated stories that other just believe everything is a conspiracy.

This is how it is done all the time. Exaggerate whatever it is and you will convert it into a conspiracy theory and then the issue is discredited. This is just standard. Always look at the source. Propaganda wars began with World War I and it has expanded dramatically ever since. It is organized disinformation. People love conspiracy theories – give them one that points away from government and the politicians are always home free.