Thailand of the Verge of State of Emergency 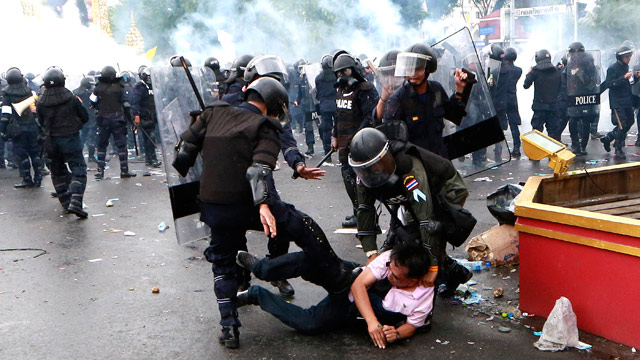 The violence in Bangkok is mounting. This is an effort by some to overthrow the government as a weekend just past with violence in the capital city of Bangkok. The protesters have been trying for more than two months to bring down the government in a Marxist uprising of the poor against the rich, middle class, and the monarchy. This has been an 8-year conflict that emerged from mainly the poor rural supporters of Prime Minister Yingluck Shinawatra and her brother, the ex-premier Thaksin Shinawatra, who was toppled by the military in 2006. The government has announced they are considering declaring a stat of emergency.

The rival politicians exploit the poor rural workers telling them that if somehow they get the money of the middle class and rich, somehow their lives will be better and they will have to work less. This is simply appealing to the criminal side of humanity where when you do not have what you want – just go take it from someone else. On the street these are criminals. When they get politicians to do it by decree, they call this social justice. At the end of the day, it is still about taking from someone else what you yourself are unwilling to work for.

Unfortunately, this is the downside of the Cycle of War. Appealing to the less honorable aspects of humanity and the thief ALWAYS justifies their own actions convincing themselves that they are entitled to whatever the other person has because they have been cheated somehow in their own mind.