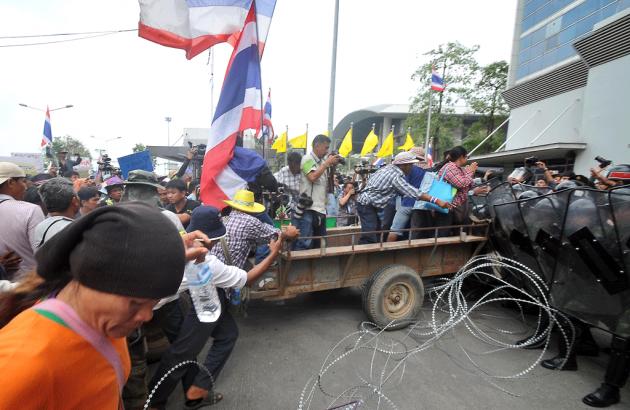 The crisis in Thailand continues to expand. There has been a run of the banks and now the state-owned Bank for Agriculture and Agricultural Cooperatives (BAAC) halted the planned borrowing from the Government Savings Bank (GSB) to pay for the rice pledging scheme for the farmers until the Finance Ministry clarifies the legality of such loans.

One major depositor withdrew their money that they did not want to be lent to the masses of farmers. This led to some 30 billion being withdrawn showing a serious collapse in confidence. Savers flocked to withdraw deposits from GSB across the country, especially in the South, which is a stronghold of the opposition Democrat Party.

Prime Minister Yingluck Shinawatra on Tuesday blamed the delaying in overdue payment under rice-pledging-scheme on anti-government protests. She said in a special televised programme that the leaders of protesters have seized the farmers as hostage in their political game to bring down her government. They resorted to by all means and looked for every loophole to block the caretaker government from repaying…

The embattled government was put under more pressure when thousands of farmers marched from the Commerce Ministry and other sites to the Office of the Permanent Secretary for Defence in Muang Thong Thani, demanding a meeting with caretaker Prime Minister Shinawatra.
Categories: Uncategorized