Taxing Financial Transactions – Why Did Interest Rates hit 200% in 1899 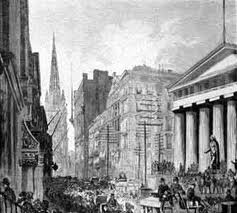 The European idea of taxing financial transactions is nothing new. The EU aims to tax financial institutions a minimum of 0.1% on purchases of shares, bonds and other securities, and a minimum of 0.01% on the notional amount of derivatives traded either on- or off-exchange. Historical evidence indicates that this will discourage foreign investment while increasing volatility and reducing liquidity. Our research has actually been confirmed by a recent Bank of Canada report went through a litany of cases, including a tax imposed by New York state from 1905 to 1981 and a Swedish tax imposed in 1984, and found that all seem to have raised volatility and reduced liquidity.

.In the US, during 1863, Congress imposed a 0.5% tax on speculative trades in gold, which was toughened up one year later in an attempt to keep the price of gold from exploding during the civil war with the introduction of paper currency. Like India today, the US was out to try to stop the rise in the value of gold.. In response, gold immediately went from $198 to $250 in terms of greenbacks, which absolutely humiliated Congress forcing them to repealing the law just two weeks later. This is the point that trying to make something illegal seems to have the exact opposite impact.

During the Spanish American War, Congress again introduced the War Revenue Tax Law of 1898, which imposed a 0.1% federal transaction tax on stock trades. This tax did not reduce domestic speculative trading, but foreign investment fled and the Panic of 1899 produced the highest level of interest rates in US history (nearly 200%) because of the tremendous lack of liquidity created by the tax that sent foreign capital fleeing out of the USA..

It was that imposition of Spanish-American War Taxes on financial transactions that sent foreign capital out of the USA producing the highest level of interest rates. We also see in France the droit de transmission (transfer tax), also introduced in 1893 that assessed taxes at levels of 0.2% to 0.5% on shares, and this appears only to cut off foreign investment in France and no foreign companies would list in Paris.

Taxes on financial transactions have never worked just as the wealth taxes in Switzerland and elsewhere in Europe are discouraging foreign capital from engaging there in commerce. Imposing any tax unilaterally has the impact of sending capital elsewhere and taxing financial transactions will only cause capital to migrate overseas to whichever markets do not impose such fees just to invest capital that has already been taxed numerous times.

After all, in a world of instantaneous electronic trading, we cannot honestly entertain taxes on high frequency or day trading. This will further shrink liquidity sending buyers and sellers to immediately transfer their activity to the venue with the lowest cost of buying and selling. Capital will simply migrate and volatility will rise in the face of a decline in liquidity.

Transaction taxes have been detrimental to attracting capital creating higher volatility and declining liquidity. Further evidence was the transaction tax imposed by New York state in 1905 on the NYSE that set off just such a backlash effect: During the very first month under this new tax scheme, trading surged two-and-a-half-fold. The annual portfolio turnover rate on the New York Stock Exchange jumped from an already high 191% the year before to 244% in 1905 and 240% in 1906. (At that rate, shares were changing hands once every 20 weeks, a record never again matched in the 20th century.) Since 1905, New York has imposed a tax (transfer tax) on securities transactions, if part of the transaction occurs within the State. In 1968, the state legislature amended the transfer tax statute so that transactions involving an out-of-state sale are now taxed more heavily than most transactions involving a sale within the State. This was challenged in 1972 as unconstitutional under interstate commerce, but of course the NY courts found in favor od the State as always.

The real impact is only the threat of moving because of the tax. None of the States in which the competitive Exchanges were located taxed the sale or transfer of securities. During the 1960’s the New York Stock Exchange became concerned that the New York transfer tax created a competitive disadvantage for New York trading and was thus responsible for the growth of out-of-state exchanges. In response to this concern and fearful that the New York Stock Exchange would relocate outside New York, the legislature in 1968 enacted § 270-a amending the transfer tax by providing for two deviations from the uniform application of § 270 when one of the taxable events, a sale, takes place in New York.

Taxing financial transactions reduces investment that effectively creates jobs by encouraging small companies to go public to raise money for expansion. Government simply only looks at what they can grab for themselves without any consideration of the impact upon the economy.