QUESTION: Marty; Your model correctly forecast the birth of the Arab Spring in 2010 that was 31.4 years from the Shiite Revolution in Iran back in 1979. You also said that the subsequent 8.6 to 13 years would bring rising civil unrest that would emerge into civil war when the War Cycle turned up in 2014. This seems to be taking place in Iraq right now. So where do we go from here?

ANSWER: We are preparing an update on that model. Most people have no idea in the West what a Sunni-Shiite conflict is all about and that this has been a cyclical trend between peace and war since Muhammad died in 632. The Iranian Revolution took place in 1979 and 31.4 years later we had the Arab Spring that began 2010.964. It surprised many because they expect revolution only when there is some defeat at war, a financial crisis, peasant rebellion, or disgruntled military. In the case of Iran, the revolution occurred in a nation that was enjoying relatively good material wealth and prosperity, although there was resentment against foreign investment that became America in the eyes of the Great Satin. What the traditional pundits missed was the cycle in religion and the historical battle between Sunni and Shiites.  Once again, they fail to understand what is going on and how many Sunni in some respects consider the Shiites not to be even followers of Islam. (OUR WORK IN THIS AREA WAS CAREFULLY REVIEWED BY BOTH SUNNI AND SHIITE AUTHORITIES FOR ACCURACY AND IS NOT OPINION NOR DO WE TAKE ONE SIDE V THE OTHER) 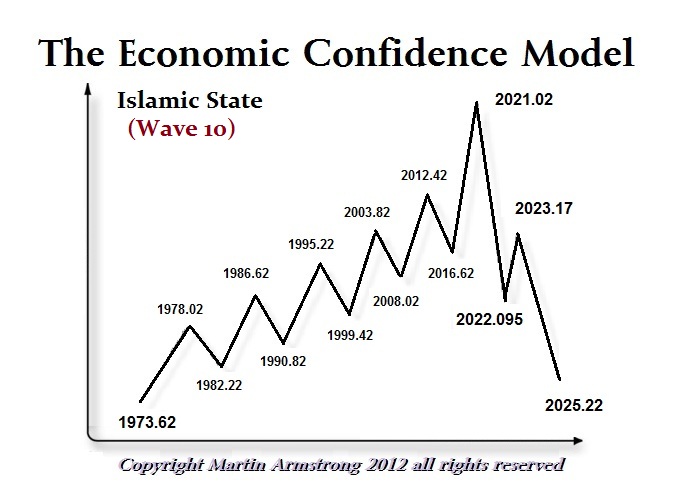 The Iranian Revolution came 8.6 years after the collapse of Bretton Woods that then sparked the decline in the dollar and the first OPEC oil price shock in 1973. That was the start of the 10th wave of 51.6 years from the birth of the first Islamic State in 622.

From there, we should see more violence and a religious revolution in the region once again 8.6 years from 2010 taking us into 2018. The full cycle will be into 2021. That should turn up starting 2014. So far everything seems to be on target. When the economy turns down in 2016, the intensity should rise around the globe. There is a 309.6 year cycle in religion that has been extraordinarily regular and that includes ALL religions not just Islam. This is of course amplified by economic downturns.