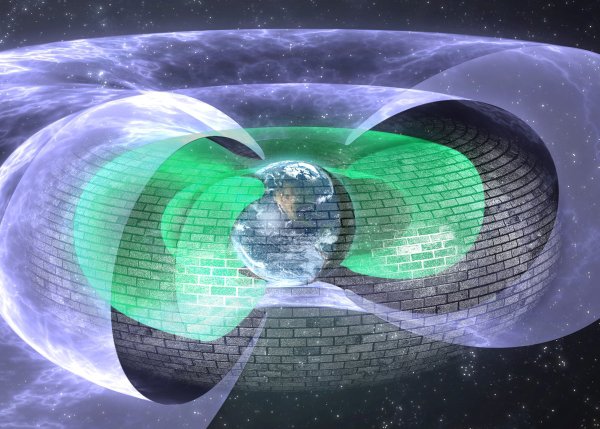 Scientists have discovered Star Trek-like invisible shield found thousands of miles above Earth. This barrier protects the earth from  particle motion was discovered in the Van Allen radiation belts. This shield holds so-called “killer electrons” them from penetrating the Earth’s atmosphere. These high-energy particles are confined in the speed of light around the planet and make outside of the envelope a threat to astronauts and satellites. In particular, when solar storms killer electrons cause losses to space devices to.

This invisible shield is roughly 7,200 miles (11,600 kilometers) above Earth that blocks so-called “killer electrons,” which can fry satellites and degrade space systems during intense solar storms. As the researchers in the journal Nature, and on the homepage report to the University Colorado have discovered essentially a force field as in Star Trek movies that protects the earth from these high-energy particles. The belts are held by the magnetic field of the earth in position and swell, if the incoming solar energy increases. This was discovered by Professor Daniel Baker who said “It is as if these electrons run against a glass wall. Just like the shields of force fields, which are used in Star Trek fend off alien weaponry. It is an extremely amazing phenomenon. “

Many scientists are now puzzled trying to comprehend force fields. One scenario is that the cold gas cloud of electrically charged plasma sphere scattered particles upon impact in low-frequency electromagnetic waves. That would at least explain to her plasamashperisches hissing sound: “The hissing sounds like white noise when it is transferred to a speaker,” says Baker.