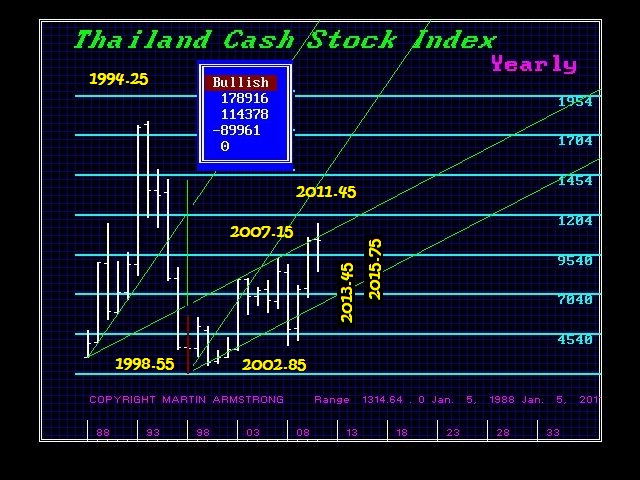 What a lot of people in the West may be unaware of is that Southeast Asia is trying to blend their economies into a trading region. They are maturing and preparing to rise as a very important economic center for world capital. Most significantly, when I was invited to Beijing following the 1997 Asian Currency Crisis, still the majority of people on the roads were on bicycles. Today, barely 1% are still riding bikes. Asia has matured greatly since 1997 and above all, it has followed the Economic Confidence Model perfectly, which is one of the primary reasons for the acceptance our our models in Asia and why Beijing requested I travel to China at that time.

Here is a chart of the Thailand Share Index on an annual basis. The high came perfectly with the low to the day in the S&P 500 in the United States. The low in Thailand came with the July 20th, 1998 peak in the US market. It then consolidate constructing a base into 2002 and then rallied into the 2007.15 turning point. We have elected one Yearly Bullish Reversal and have two to watch for the sign of a major breakout to the upside.

Asia is perhaps the brightest star in the sky for investment as we look and economic declining power of the United States and Europe. This will be a major focus of our Bangkok Conference and why we are holding this one in Southeast Asia.

« Double Edge Sword of the Invisible Hand
Has Greece Bottomed? »