Simply Running A Correlation On One Theory Produces False Positives 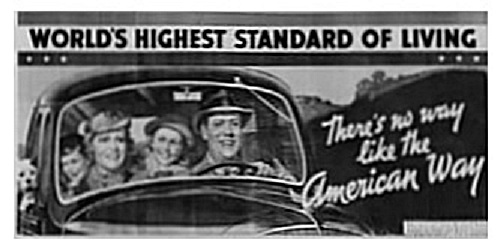 The study of Professor Miles Corak is being used to justify more Socialism to support the argument as proof positive that the American Dream has failed. The American Dream has been defined as economic freedom and in this light it is rooted in Adam Smith and Laissez-faire  economics. It is essentially Equality of Opportunity that remains as the primary major goal of both liberals and conservatives. However, the American Dream when this billboard appeared was BEFORE income tax. Whatever you made was yours to spend freely until government decided they could do a better job with your money. 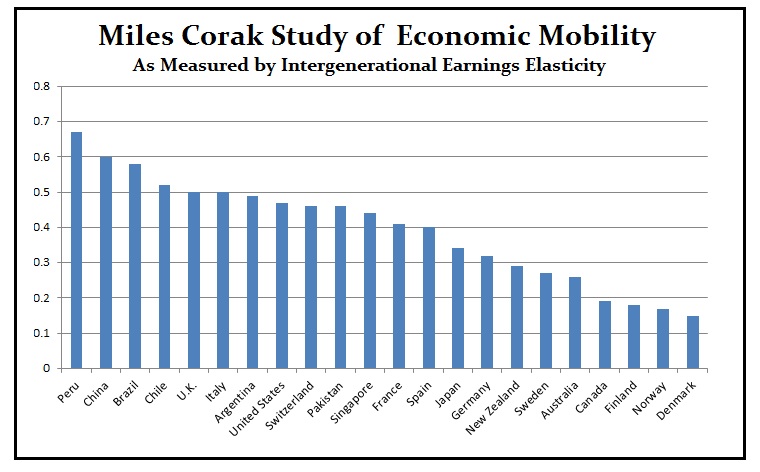 Unfortunately, Professor Miles Corak begins with a single dimension of economic mobility in the United States compared to other countries. Corak’s intergenerational economic mobility perspective looks at the advancement between fathers and sons. The assumption is that within a society with equal opportunity, a father’s income would have no relation to that of his son with a correlation factor of 0. On the other hand, a country where jobs and income transition from one generation to the next would have a correlation of 1.

This assumption is totally off base for if you step outside the office and actually observe society, you will find that the greater the father’s income, the higher education opportunity will become available to the son. The interpretation of the data illustrates the lack of global correlation. You cannot take a single assumption and then ignore the rest to the spectrum of economic activity and assume you have made some discovery. Everything is interconnected.

A great reason for the failure of the correlation is also the introduction of the Payroll Tax in 1937 that always begins as minimal – just 2%. The higher the taxation, the lower the living standard becomes and there is a serious decline in the ability of one generation to even maintain the same living standard as the previous. This is why under socialism we are seeing unemployment among the youth in Europe at over 60% in the southern region. The American Dream has been seriously disrupted by the lack of consistency in the tax rates. Politicians keep raising and lower taxes without any consideration that business needs to have a plan to even borrow money. They base their profit forecasts on current tax levels, and then politicians upset everything and alter the future with a pen stroke. More companies have level the USA by no means because of the tax level, but because of the inability to be able to project the future. Other countries are offering 20 year tax deals to attract companies for they need stability. This same trend is seriously altering society and the intergenerational economic mobility.

Far too often, the greater the income of the father, the less productive the son will be if the son is “spoiled” and not made to fend for himself to some extent. Rockefeller understood this and he would not leave money to an heir unless they proved themselves. He would match whatever a son made. In this manner, he instilled talent and drive.

The assumption that there would be zero correlation proving that the American Dream (economic freedom) would not flourish is dead wrong. That is not economic freedom. You see the highest correlation in developing countries because people are still climbing the ladder and the next generation is still building upon the previous. The more affluent a society becomes, the lower the birthrate and the less economic advancement takes place.  The next generation has everything handed to them and thus expect more for less.

Hence, students in the United States continue to decline slipping lower in the international rankings amid all other nations in education. Of the 34 OECD countries, the United States ranked 26th in math. This is the normal trend and it is how empires fail. There is not a perfect correlation, but this idea that the next generation need not work as hard as the previous signals the peak in an economy.

American education is the real joke. Even Forbes Magazine reported that 60% of students cannot find a job in the field they majored in school for they are not really properly trained. The bulk of anyone;s worthwhile knowledge comes from EXPERIENCE not university. Forbes also reported that half of college grads are working jobs that do not require a degree. I myself have met a number of people working at Starbucks with degrees. We have totally failed in education and the taxes keep rising and more socialism is not the answer.

Only under communism would we reach a zero correlation for everyone earns the same. The very idea that the American Dream of economic freedom should lead to a Communistic state of perfection is dangerously absurd for the conclusion would then be more socialism. Ideally, each generation builds upon the previous and advances in the standard of living. However, this is the uptrend in the cycle and then society peaks with affluence, and the decline then begins. The cycle will not turn back up until the next generate expect nothing and go out and create their own future.

You cannot take a single assumption and yell – Eureka! You must still take that and run it against everything else to reveal that your assumption failed for it did not consider the myriad of interconnected relationships that create a complex dynamic world in which we live. You must also come to the realization that NO RELATIONSHIP is ever stagnant. It always has its own cyclical trend.