Shamans from Tuva Warn the Gates of Hell Have Been Opened 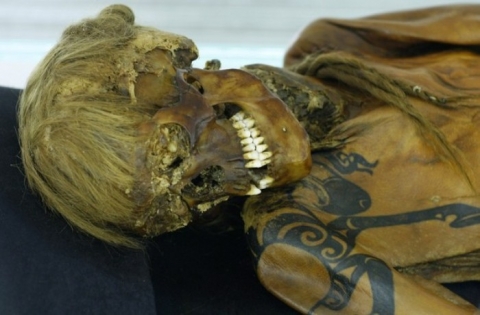 In the center of Asia, the shamans of the Altai and the local indigenous people believe that the cause of the military conflict in Ukraine was the so-called removal of the Altai Princess – mummy of a woman, which archaeologists have discovered 21 years ago in the country. The Shamans from Tuva, Altai and Khakassia repeatedly performed rituals to calm down the situation in Ukraine, but to no avail.
Altai elders are confident that after the beginning of the 1990s, archaeologists dug up and moved from the mound to the museum with the remains of Princess Ukok Plateau, the world has penetrated evil. They wrote about it in the text of the appeal to the Russian leadership.

“Princess stood guard the gates of the underworld, preventing penetration of Evil from the lower worlds. However, after the mummy learned archaeologists, it is believed Altai, lost their strength and can no longer perform its protective function. At the Earth began to penetrate evil. If you bury the mummy, then stop now feuding two blood brothers. Stop the war between East and West “

In the Altai, the people are collecting signatures calling for that return the mummy back to her burial-place. Local residents are planning to go to the rally to the walls of the National Museum, which houses the “Altai Princess.”

They are warning that natural disasters will occur including floods, hail, and earthquakes, due to the fact that their ancestress did not bury by human traditions. Her burial was special they argue. They furthermore argue they now have a high suicide rate and other woes. If she is not reburied, they fear even more terrible things will happen.
The Mummy of this old woman was found by the expedition of Novosibirsk archeologist Natalia Polosmak in the mound of the Scythian period in the Altai Ukok plateau near the border with Mongolia. Age finds estimated at more than 2.5 thousand years old. It was called one of the most important discovery in recent archaeology. Scientists have taken a mummy in Novosibirsk for research and, until recently, did not want to return her, despite the requests and demands from the government of the republic. Here even the indigenous population, devoted to his pagan mythology, consider her as the  guardian of the Earth.

Interesting how freedom of religion does not really mean what it is claimed to be. It seems there is freedom provided the majority believe. This is an interesting philosophical question. If these people believe this mummy protects them, is it anyone else’s right to disregard their beliefs? Some indigenous people believed taking their photograph was stealing their soul. Do you laugh or respect their beliefs?

« Forecast Your Own Business
Changing Bankruptcy Laws for Banks »