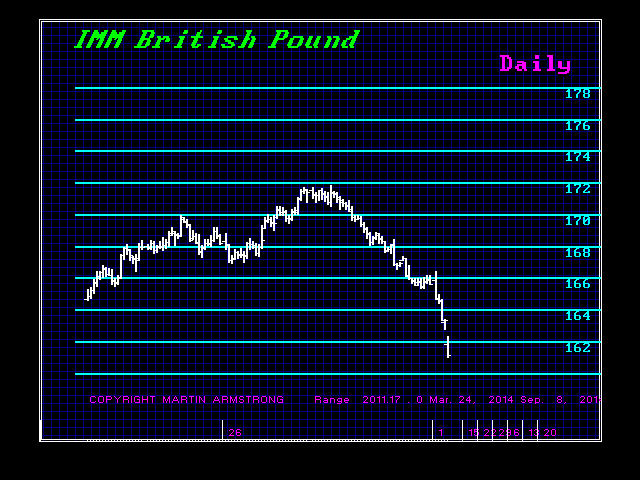 We have been warning that the Scottish separation was something to take seriously since the Berlin Conference in 2012. Now suddenly the polls are showing Scotland just may vote YES and leave the UK because of the rising chaos in the EU and the totally insane policies in France. The British financial markets tumbled on Monday after an opinion poll showed for the first time this year that Scots may vote for independence in a referendum next week on the 18th, breaking up the United Kingdom that was first joined in 1707.

The latest poll has sent a shock-wave that is bordering on the verge of a panic among Britain’s ruling elite. The chart pattern of the pound looks like a Waterfall Event. Prime Minister David Cameron’s Conservative-led government is now suddenly promising proposals this week to grant Scotland greater autonomy if it stays. All the pundits had said we were wrong and there was no support in Scotland for such a separation.

This is the chart we showed at the Berlin Conference illustrating the rising separatist movements. This is part of the Cycle or War model. Sorry, but this is the civil unrest rising as we have warned that such trends are driven by economics. Turn down the economy and this is what you get.

Cameron’s job as Prime Minister is now on the line if Scots vote on Sept. 18 to secede. Cameron is clueless as he still tries to dance with the EU. Now with just eight months before a national election planned for May 2015, which will be yet another surprise, Cameron said that the government was not making contingency plans for the possibility of Scottish independence in a vain attempt to say it will not happen. Yet the masses are stirring and politicians fail to grasp that the world economy is imploding and the forms of insane governments with perpetual borrowing that has no intent of paying anything back just cannot continue forever.

Sterling fell more than 1% scoring its biggest one-day drop in 13 months, This should be expected for the markets are reacting more to uncertainty than reality. When the pound would not join the euro, the pundits sold the pound and claimed it would fall out of bed and the euro would be king. We got called in to get major companies out of short positions on the pound when it rallied.

Once again the analysts are writing off Scotland warning it will be a huge short if it leaves Britain and the UK. But frankly, once again we see the opposite. The Scots are conservative and this is where economics was born. Virtually every bank has been warning investors outlining the risks to the U.K. economy and European unity of Scottish independence. But nobody addresses the risks to remaining in the UK and the collapse of the EU. They do not even contemplate such a scenario.

Sorry, the Unionists claim it’s ‘Better Together’ campaign but cannot articulate the risks of remaining with the EU. Nevertheless, after months of polls showing nationalists/separatists heading for a certain defeat, the survey by the YouGov pollster raised the real prospect that secessionists could achieve their goal of breaking the 307-year-old union with England that would actually complete a 309.6 year cycle.

The current polls indicate Scots have been bothered by a perceived scare campaign launched by unionists that effectively tell the Scots they are second-rate people incapable of self-rule. The pro-independence Scottish First Minister Alex Salmond appeared much stronger than Darling in a television debate on August 25.

Britain is going to have to choose between a failed EU or the UK. The Scots are forcing this upon the whole of Britain.