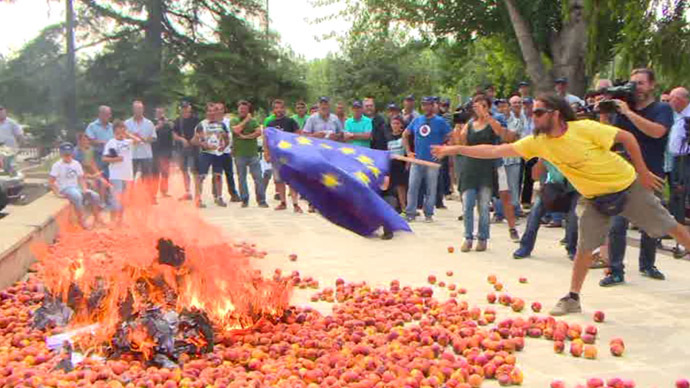 In Netherlands, farmers are being driven into bankruptcy and banks have lent money ti farmers they cannot now collect. In Spain, Catalan peasants burned their crops publicly protesting against the policies of Brussels. They see the EU Strategy against the Russians and their import ban on EU vegetables as brain-dead and misguided at best.

A trade union representing Catalonian crop growers and cattle ranchers has staged a protest, demanding that the EU compensate them for the revenues lost as a result of the escalation of sanctions, which have closed the Russian market to them.

Politicians simply have no concept of the damage they do to people when they try to apply political pressure using the economy as a weapon. The Russian sanctions will seriously impact European agriculture and in the end, many of these farmers will be driven out of business permanently. They burning EU flags everywhere as the civil unrest will only grow moving into 2017-2018.

« Draghi Emerges from Jackson Hole Stating Germany is Wrong
Are we Heading for Another French Revolution? »