In Slowjansk, Eastern Ukraine, we have our own direct sources that confirm with photographs that Russian troops have invaded and occupy the city. We have direct confirmation that these men in green are from the Russian forces, but mostly from Chechnya. The Web Cameras that use to broadcast all the time in Slowjansk have been turned off now for almost 4 weeks.

This is a picture one of our direct contacts took in Slowjansk. This is not found somewhere else on the web and it is real – not propaganda. We have confirmation from our people there in the East these Russian troops are indeed occupying the region. They all have the same uniforms with no markings that appeared in Crimea. There is no way someone who is non-military would have had the money to create such uniforms in mass or provide military grade weapons.

Putin is now also going to control the whole Russian speaking Internet. The 1st victim is already vk.com – the Russian Facebook. The creator and CEO of vk.com was fired from his position. He himself says, they wanted him to give out all the personal dates of the activists of Maidan, he did not want to do it and had to go.
This is the real deal. This is not spin from one side or the other. We are looking at reality and the West does not want to formally address this issue for it would imply that ground troops are necessary that nobody wants to provide. 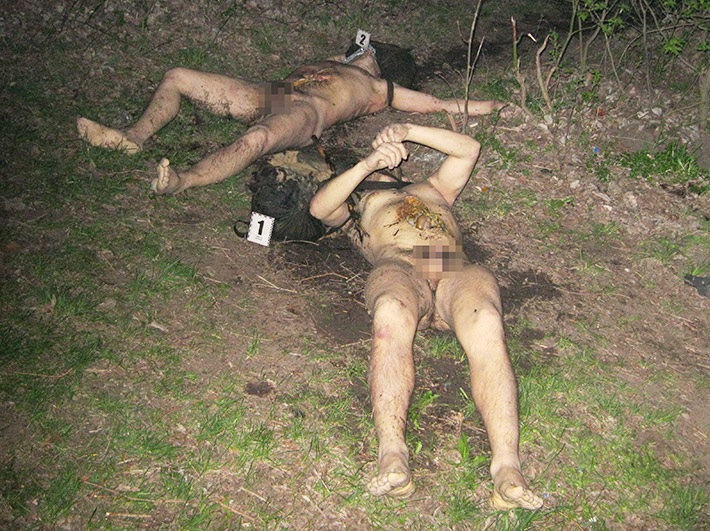 What is also taking place is pro-Ukrainians are being tortured and murdered now in various cities – this includes young teenage boys. Here are two people from Gorlivka who were tortured to death for raising the Ukrainian flag. One hour ago, a third victim was discovered dumped in the same location. This is having a chilling effect on Ukrainians in the East who do not wish to be apart of Russia and seek freedom.

Someone has created the completely new flag declaring the Republic of Donetsk that never before existed. Clearly, this is not even a former Soviet Republic and it will never be recognized as an independent country. Therefore, the only way to deal with this vision is to join Russia. This is the flag that was taken down that resulted in at least two murders so far.
What was a peaceful demonstration of people who were pro-Ukrainian marching with the Ukrainian flag in Donetsk turned into an assault with pro-Russian beating those who wanted to remain part of Ukraine. The police just stood-by and did nothing to protect the people from the Russian “tourists”.
There is no level of sanction that will resolve this issue. The only possible solution is to split the country and allow those who want to remain as Ukrainian should be given aid to move. Property values in the East have collapsed to zero. Nobody can even sell their house to move. They are totally trapped with zero hope of surviving as independent individuals. They will be hunted and killed little by little and the sooner we realize there is no sanction that will protect these people, then and only then can innocent lives be protected. Russia is taking the East – that is a given. Help the people who want to leave – leave. That is the ONLY just solution at this point. They need aid to restart in the West for they must leave everything behind. This is checkmate. Nobody will defend these people so let’s just get real.
Categories: Uncategorized