Russia Recalls Ambassador to NATO As this Spirals Out of Control 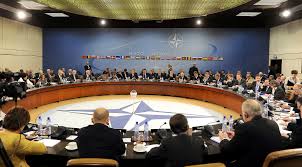 The US has been encircling Russia with nukes for sometime and they have been escalating the Ukrainian affair to the brink of war. NATO suspended all cooperation with Russia over Crimea and these people actually think they are accomplishing something. Russia has recalled its Ambassador to NATO and the West is just insane. Crimea was not originally part of Ukraine and that should be respected since it was a gift within the Soviet times. This is why from the outset, I stated hand it back to Russia for it would only lead to war otherwise.

Russia is not some small third world country to be bullied into doing as the West demands especially when the economies in the West are on the brink of economic collapse and in the same position that Russia was in back during 1991. Putin knows that nukes do not matter for nobody will push that button. Nonetheless, Crimea has been a strategic piece of land since ancient times and it was even the outpost from which the Black Death was brought to Europe. Historically, this has been the flash-point that our models were targeting and so far they seem to be spot on.

Here is one of the ancient coins from this region. It displays the Gorgon with his tongue sticking straight out at you. Not much has changed in thousands of years.