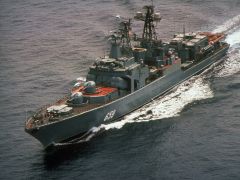 The Russian Vice Admiral Kulakov destroyer is heading for Syria. Just one day after the G8 Summit ended in the complete failure of Western leaders to overcome Russian resistance to a resolution mandating President Bashar Assad’s ouster, Moscow announced Wednesday June 19 that it was dispatching two warships carrying 600 Russian marines to Syria. The official statement claims that they are going “to protect the Russian citizens there.”

What is amazing is how there is a time for everything. Our computer model has been warning that the War Cycle is turning up. What gives Russia the courage to become more bold, it is the weakness in the economies of the West. This is PRECISELY the same reason the barbarian moved into the Roman Empire. They could smell the blood. Because the bankers are bleeding governments dry and there is no hope of political reform, we are headed into a downward economic spiral.

Putin has warned the West that if they persisted in arming the rebels any further, and Obama boast of supporting the rebels while Kerry wants air strikes inside Syria,  Russian troop landing in Syria will raise the stakes tremendously and Putin is showing Obama he is not alone and Putin will not tolerate America pretending to rule the world.

Some 20,000 Russians do live in Syria. Previously, Syrian domiciled Russians were given the instructions were to gather should Moscow decide to lift them out of the war zone. However, the evacuation of Russian citizens would in itself dramatically denote the expansion of the Syrian conflict whereas they now afford the excuse for Russian support of Syria.

« The Dow & The Future
NSA Relies on Private Contractors »