Now in the Eastern parts of Ukraine even 600km northeast of Crimea than has had all its communications cut off, Ukrainian flags are torn down and Russian flags are now starting to appear. One various social networks, there have been open cries for more Russians to appear in the East of Ukraine to provide justification from Russia to move in to protect its citizens. Russia is now invading under the pretense that Crimea has asked Russia for help. So we are now moving to checkmate.

The rumors being circulated claim that the people of Maidan are dangerous revolutionaries intent on killing all Jews and they will invade other cities to kill any Ukrainian that disagrees with them. This is then spun into seeking Russia to protect the Ukrainian people from these madmen. Yet there are Russians appearing with signs that say they are Russian but they want to live in Ukraine asking Putin not to invade.

The situation gets worse with each passing day. It seems clear that Russia will take Ukraine. They are waiting for any Ukrainian to begin shooting at Russians to justify the coming invasion. From an economic standpoint, this should impact the financial markets in a major way.

There are those who in Russia and the typical conspiracy nuts in the USA that claim this is a failed CIA plot. They disrespect those who died and cannot see for a single moment that this is a global trend that is being driven by economics with wide-scale corruption that will appear even in the USA. They constantly want to see the world in war, spin nonsense they know nothing about, and this they preach will make only gold rise and nothing else.

There was no CIA plot. Now they are no doubt scrambling. This began as a real grass-roots event and that is why these people were not armed. If it was a real funded uprising, they would have had every weapons just like they hand out in Syria. A lot a real people will now die and they are fighting for their OWN freedom.

One reader writes comparing the Russian invasion of Georgia to the events in Ukraine noting that things did not pan out as these same people claimed back then like some broken record playing with the financial lives of people:

Let’s look at returns for several asset classes during this time period: 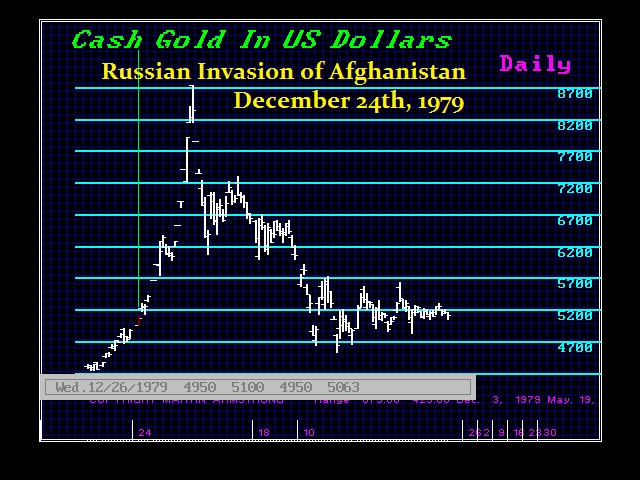 If we look at the Russian invasion of Afghanistan on December 24, 1979, this helped to contribute to the final Phase Transition in gold. From the 1976 low of $103 to December 1979, gold struggled to rally $400. However, the final Phase Transition saw the doubling of gold in the last 4 weeks until it peaked on January 21st, 1980. Clearly, the rhetoric by the gold promoters must be taken with extreme caution. They wiped out so many people back then as well preaching that the decline was temporary and that only gold would soar to many thousands of dollars. Reagan was pictured as a Hawk and we would be engulfed in the end of the world. Gold declined for 19 years, yet they are back again with the same slogans that seems to entrap generation after generation.

We have serious issues to deal with and they MUST be approached with caution, objectivity, and without this constant bias that leads to perpetual losses. We need ONLY facts – not opinions for as in markets, the majority of opinion is ALWAYS wrong.