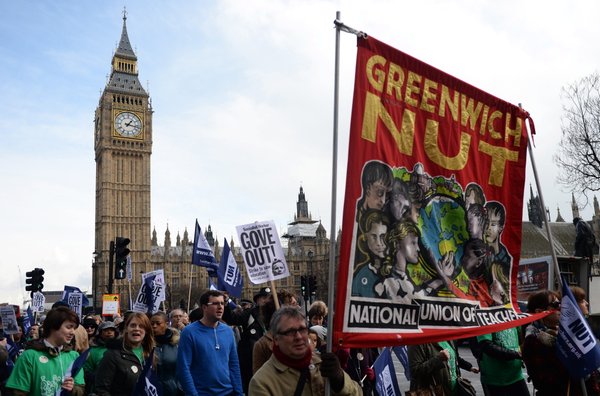 The British government has just invested in water cannons because they are fearing the rising tide of civil unrest as austerity is forcing the reduction of state workers and their pensions. I have been warning that unemployment will rise, but this time it is going to flow more so from the state and municipal workers. In the UK, hundreds of thousands have took to the streets to protest against the austerity measures of the government. Prime Minister Cameron has no choice for this is the collapse of socialism. Those who think I am anti-poor or whatever, are missing the point. It is the rising cost of government that is out of control and NO LEVEL of tax increase can reverse this trend.

The British unions called for strikes nationwide. Teachers, firemen and civil servants joined the calls and and took the streets demonstrating for higher wages and pensions. Just where is this money supposed to come from they really have no idea. They merely argue to take it from someone else no matter what and give it to them.

According to the unions more than one million people took part in the strike. About one-fifth of state employees have taken part in the strikes. Indeed, the majority had appeared on the job to maintain “almost all key areas of public service” functions. The interesting question this presents if everything can function with one-fifth less, then does this suggest that government can be run with far less people? Nonetheless, some 6,000 schools did remain closed, which was about one quarter of all schools in England. The strikes also impacted museums, libraries and garbage (refuse) collection in some cities. At the airports, such as international London Heathrow and Luton, there were delays because parts of the ground crew were on strike. Around 12 percent of government employees in Scotland joined the strike. Also in Northern Ireland and Wales there were many public institutions – including schools, courts and job centers – that had also closed on Thursday.

Public employees do not care where the money comes from, they refuse cuts and demand their pensions. This is similar to what happened in Rome where the army, when unpaid, just began sacking their own cities to grab whatever they had being justified as the army deserves it.

The central demands of the workers were against the austerity policy of the British government. In 2010, the salaries were frozen in the public service first. Then in 2012 an annual wage increase was written down by one percent. Governments are going broke because they promised pension and failed to fund it always assuming there would be ample tax revenues available.

Effectively, in Britain there was a two-year pay freeze, and then the 3rd year comes another freeze followed by a one-percent wage increase.

« Understanding Everything is Connected
Real Estate – The Global View »