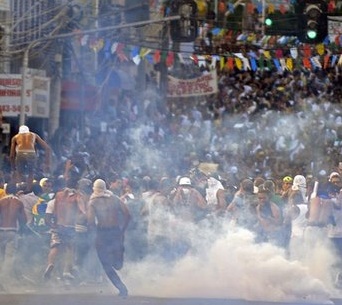 Serious rioting during protests against the World Cup in Sao Paulo, Brazil. The cost of the World Cup have risen to 60 billion dollars. The people are now protesting against the continual corruption that is causing escalating costs. The mob has been setting vehicles on fire right in downtown.

It seems that those who keep spreading lies about CIA plots and the like are trying to distract the people from the real threat – continual rising civil unrest against government corruption that is brewing on a global scale. This should really start to heat up after 2015.75.