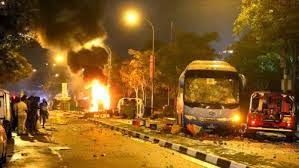 The riots that erupted in Little India in Singapore on December 9th are indicative of an underlying problem there. Because of so many foreigners have moved to Singapore, it is widely viewed that they have caused widespread inflation. This has spilled over into a “general” feeling about foreigners even migrant workers causing the problem raising the cost of living. This is all economic based. The rising tensions around the world are building and there is NO PLACE that will be immune from this trend in rising civil unrest on a global scale in the Cycle of War. (see news reports)