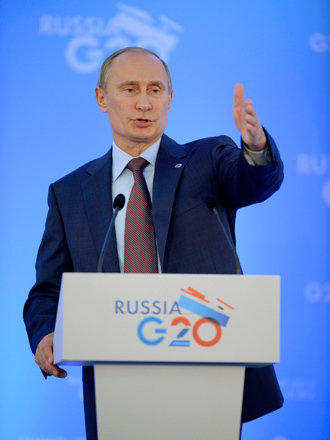 Of course the American commentators are hurling nothing but insults at Putin for his Op-Ed in the New York Times. They dare to say with chemical weapons being used in Syria, he has no moral standing. Putin rightly points out that there is a serious casualty here and that will be the United Nations. “No one wants the United Nations to suffer the fate of the League of Nations, which collapsed because it lacked real leverage.” On that score he is correct. If the USA says the UN will not sanction what it wants to do and it will act unilaterally, then Putin is correct. The UN has nothing and will mean nothing. The USA says how dare Putin and China block what they want to do at the UN. But when the world wishes to sanction Israel, the US always blocks that as well. SO this is the pot calling the kettle black.

Putin has rightly pointed out that if the US strikes Syria, “[i]t could undermine multilateral efforts to resolve the Iranian nuclear problem and the Israeli-Palestinian conflict and further destabilize the Middle East and North Africa. It could throw the entire system of international law and order out of balance.” This is absolutely true and every source I have confirms the US will undermine the only chance we have to help President Hassan Rouhani in Iran who was elected by a landslide of young Iranians who disagree with the old hardliners and want Iran to rejoin the world community. Obama will destroy the creditbility of those elections and Rouhani will not stand a chance. So where is the moral standing on this issue?

Putin rightly stated: “Syria is not witnessing a battle for democracy, but an armed conflict between government and opposition in a multireligious country.”  The news sources on the internet confirm that is true from videos showing the decapitation of priests in the most barbaric manner carving the head off with a knife. They post videos carving the heads off of boys and girls. Obama says nothing about this treatment of people. Gasing someone is far more humane than what the Rebels are doing.

Putin has stated: “No one doubts that poison gas was used in Syria. But there is every reason to believe it was used not by the Syrian Army, but by opposition forces, to provoke intervention by their powerful foreign patrons, who would be siding with the fundamentalists.”

The mainstream media in the USA simply ignore anything which demonstrates that this statement may be true. They will not even address Mother Agnes Mariam el-Salib, mother superior of St. James Monastery in Qara, Syria, has been speaking out that there are mass murders by the Rebels. They take villages and behead everyone. They took a Christian girl cut off all her limbs while alive. Congress will not speak of these crimes. They want only to say they should try Assad with war crimes.

On September 3rd, Kerry testified before the Senate Foreign Relations Committee citing Elizabeth O’Bagy, 26 who worked at a think tank, Institute for the Study of War, arguing that the war in Syria is “not being waged entirely or even predominately by dangerous Islamists and al-Qaida die-hards,” but instead that the real struggle was being led but “moderate opposition forces – a collection of groups known as the Free Syria Army.” This was a joint strategy between Kerry and the warmonger John McCain relying on O’Bagy who wrote an Op-Ed for the Wall Street Journal on August 30th. But Ms. O’Bagy does not in fact have a Ph.D. degree from Georgetown University as people assumed and the Institute for the Study of War then terminated her position.

Obama is up to something and this seems to be escalating more because he realizes his entire credibility as a president is being flushed down the toilet. He realizes losing this vote could warn that he will lose all programs from here on out. So is Syria becoming a personal ego-trip for Obama? Democrats now say he does not even need the approval of Congress and they say he has the dictatorial powers to bypass Congress and any democratic process. They would NEVER have made such statements if Bush was the one asking to invade Syria.

Iran is no to send 4,000 troops to aid President Assad forces in Syria. This demonstrates that Putin is correct and that Obama is risking the start of World War III. He will not only risk boosting the hardliners in Iran, he will cause an all-out religious war that will make the Crusades look like a tourist trip.

Obama is absolutely insane. This is all about the pipeline Assad will not let be built through Syria to Turkey to compete with Russia – nothing more. If I was Assad, I would say fine, I will turn over all chemical weapons if Saudi Arabia and Israel do the same. Let inspectors go there as well. Of course that would never happen. It merely proves this is NOT about chemical weapons since every country has them including the United States.

Putin also states: “It is alarming that military intervention in internal conflicts in foreign countries has become commonplace for the United States”. This is a fair statement. Neither Bush Sr or his son argued to invade Iraq because they gassed their own people. They argued for invasion of neighbors and supposedly for weapons of mass destruction that did not exist. No country historically has the right to intervene in the domestic affairs of any nation. That is how history is made. Should all the other monarchs invade the US during the revolution out of their “national security” for once one nation rejected monarch then all would follow. Indeed, the French Revolution followed in 1789. Under Obama’s reasoning, every monarchy then had a right to invade the US to prevent the overthrow of the English crown.

Putin points out that US policy has utterly failed. He stated: “But force has proved ineffective and pointless. Afghanistan is reeling, and no one can say what will happen after international forces withdraw. Libya is divided into tribes and clans. In Iraq the civil war continues, with dozens killed each day.”  Again, he is correct in making that statement.

Putin also states: “if you cannot count on international law, then you must find other ways to ensure your security. Thus a growing number of countries seek to acquire weapons of mass destruction. This is logical: if you have the bomb, no one will touch you. We are left with talk of the need to strengthen nonproliferation, when in reality this is being eroded.” This is true. This is why both North Korea and Iran seek such weapons if not to just keep the USA from invading them. If China and Russia had nukes and the USA did not, it would quickly develop them for “national security” reasons. To claim that the leaders of North Korea and Iran are not trustworthy, that makes little sense when the political leadership of any country can be suddenly changed by election or revolution. Both China and Russia underwent political changes in leadership.

Putin also accurately explains the view of America from the outside. “Millions around the world increasingly see America not as a model of democracy but as relying solely on brute force, cobbling coalitions together under the slogan “you’re either with us or against us.”” The refusal to prosecute bankers and the antics of the NSA tapping the UN and even the European Parliament not to mention intercepting communications between leaders of nations, has all tarnished the image America still projects to its people because it does not match the view from the outside looking in. The hunt for money that led to the crazy law that if any foreign entity does NOT report what Americans are doing outside the USA then their assets will be confiscated in the USA has wiped out the international economy and is preventing Americans from creating new ventures outside the USA. All of this has greatly damaged the view of America but domestic press will never report that.

Putin’s statement that has been the primary focus of nasty TV commentators states:

“I would rather disagree with a case he made on American exceptionalism, stating that the United States’ policy is “what makes America different. It’s what makes us exceptional.” It is extremely dangerous to encourage people to see themselves as exceptional, whatever the motivation. There are big countries and small countries, rich and poor, those with long democratic traditions and those still finding their way to democracy. Their policies differ, too. We are all different, but when we ask for the Lord’s blessings, we must not forget that God created us equal.”

Of course the hurl back statements like how dare he with the issues of gay rights etc in Russia. But two wrongs do not make a right. To say you will ignore what he says simply because of that issue there is childish and certainly does not do anything for advancing the issues discussed.

No doubt what is at stake for Putin is the monopoly on gas supplied to Europe. That is his self-interest. But quite frankly, with our model on war turning up, this is a serious position where World War III can emerge from this sort of childish behavior.