Putin Beefing Up Syria – Still with Eyes on Ukraine 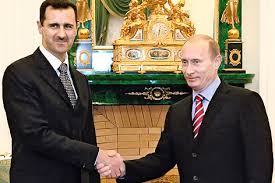 Putin has now more openly beefed-up Syria after Crimea. The West cannot stop Russia and he knows that. Stopping the pipeline through Syria is economically vital to retain Russia’s hold on Europe and the US will start to send gas to Europe in 2015. Syria is all about energy to help Europe – it has nothing to do about people. The rebels are religious motivated and if they displace Assad, then what? We have another Islamic nation opposed to the USA? Putin is dividing and conquering and Syria is his closest Arab ally. His victory in Crimea and NATO’s realization he could take all of Ukraine in 3 to 5 days, allows him to ignore U.S. and European Union calls for Assad to step down and boost Assad to ensure total victory to prevent the pipeline that would compete against Russia. The U.S. and EU hit dozens of Putin associates with travel and asset freezes the last month to protest Russia’s seizure of Crimea from Ukraine and the US Congress approved additional punitive measures this week. This of course is only escalating the entire situation and entrenched the positions to guarantee there will ultimately be a confrontation.

On Ukraine, Putin has brilliantly created a virtual reality war game that now includes a non-existent fascist threat to the lives of Russian speakers in Ukraine and the right to invade to protect them. There is no solution to negotiations since there is no such threat. The people of Maidan do not accept puppets from the US/EU or Russia just as the claims that “leaders” of Maidan hired snipers.  There are no leaders for it has been a real consensus movement and those claiming to be leaders that showed their face a couple of times are not accepted by the people. Ukrainians are between a rock and a hard place with puppet leaders they still do not trust. The people in the West all spoke Russian for one day and those in the East spoke Ukrainian to show support for each other but that gets little press.

The bottom line is clear. There is no win-win in negotiations with Putin over Ukraine because there is no fascist threat. Therefore, nothing can be offered and nothing can actually be done. Putin knows the West is weak economically and when the US economy turns down, Europe will be torn apart by its own taxes and excessively high unemployment. Hollande still claims the French people want more “social justice” that he has defined and everyone has equal income after taxes – excluding politicians of course. The only “social justice” will be to let Putin take Europe and pay the pensions. That will send him back real fast.