Contrary to the sensationalism of this article, does the inversion basically just mean that gold is going down and the U.S. Dollar is going up?

ANSWER: When gold is money, it obviously declines during a boom purchasing less as stocks and real estate rise. When the business cycle turns down, then WHATEVER is money rises in purchasing power. Cash becomes king during a recession/depression so gold bought more during any decline.

When gold is a commodity, as is the case now, then it moves opposite. It will then rise with a commodity boom but decline with the downturn. So the turning points simply invert, they still do not change. Thus, 1998 becomes a low instead of a high because money is making its high at that time. 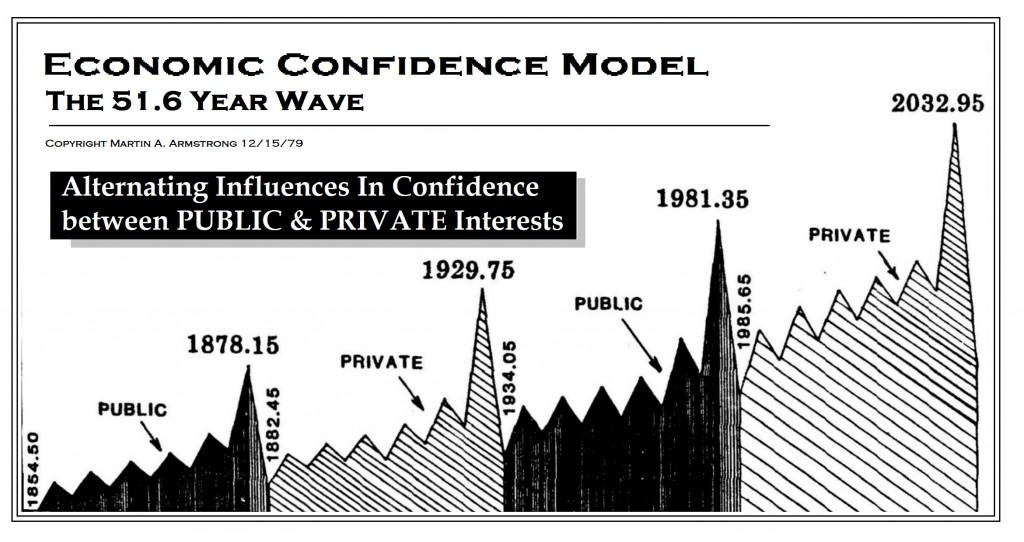 The simple story is PUBLIC v PRIVATE. Whatever is a public asset (money) declines in purchasing power against everything during an economic boom as investment shifts toward PRIVATE assets. The economic decline then unfold and PRIVATE assets decline as PUBLIC assets rise. This is the “flight to quality” where bonds rise and interest rates decline.

Gold is a unique commodity for it has switched sides depending upon its role at that moment in time. The cycle does not change. It cannot. The reason is simple. There is so much involved including nature that mankind cannot alter the cycle no matter how long he has tried to intervene and manipulate society. The Russians killed Kondratieff for saying that.

Only in the WEST do people resist cycles. Asia, it is part of their religion. Even the Bible acknowledges there is a cycle with saying there is a time for everything and in the Revelations the King James Version speaks in cycles:

[7] And when the thousand years are expired, Satan shall be loosed out of his prison,
[8] And shall go out to deceive the nations which are in the four quarters of the earth, Gog and Magog, to gather them together to battle: the number of whom is as the sand of the sea.

So I am not sure what is “sensationalism” about a business cycle that incorporates nature and tracking its movement. It is not something I created. It has existed throughout time. It is how light moves. It is the building block of the universe. You cannot point to anything that lasts forever and does not move. That is why the concept of God always was and will be is so hard to imagine there is no beginning or end. Nothing in our world is ever linear or else you would live forever. We too are nothing but a cycle. We are born, we live, and we die. Next!

I am not the only person to see the two opposite sides. When I first published this in the late 1970s, within a few years a professor at the The Citadel, The Military College of South Carolina called me and asked if he could teach this model in Philosophy. He pointed out that I had qualified a concept of Hegel. I never thought about that. When I looked closely at Hegel, I saw what he had seen in this model, 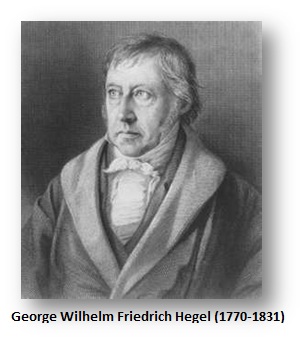 Some have gazed into the history of man and seen the mechanism that propels progress over the centuries. However, to accomplish this oscillating motion, it requires understanding and identifying two opposing forces as in market movements; bulls v bears. George Wilhelm Friedrich Hegel (1770-1831) looked into the past and came away with that realization of dynamic forces. Generally, his philosophy has been reduced to a dictum that “the rational alone is real,” which means that all reality is capable of being expressed within a system of transcendental idealism. This is what is commonly referred to as Hegelianism that has emerged from his writings including “Phenomenology of Spirit” (1807), “Logic” (1816), “Encyclopedia” (1817), and his Philosophy of History in 1820.

Hegel developed what is known as his Dialectical Scheme whereby the progress of history and thinking of mankind emerge from thesis to antithesis and hence this merges into a higher and richer synthesis. To some extent, Marx relied upon Hegel to assume that the system could emerge into a hybrid he argued would be a new state of communism. Hegel indeed applied his Dialectical Scheme in detail to religion, politics, logic, aesthetics, history and ethics. Yet Hegel had taken the position that all previous philosophical speculation had failed to give any clear view of reality, since it lacked this insight that reality could only be understood as a totality that he referred to as “the truth is the whole.” Hegel thus took the position that any attempt to understand the apparently unconnected and individual phenomena of nature, history, and the development of human life and society through any sort of separate categories of thought is utterly mistaken. There is some truth to this for we live truly within an interactive Complex Dynamic Adaptive System. It is a Complex Dynamic Adaptive System that creates the whole and that a subtle change in direction of one variable can ripple through and alter the collective whole through interaction and interdependency of the variable.

Therefore, we are capable of group behavior, but we are also capable of individual behavior. For example, it was the collective behavior of the nations after World War I that imposed such harsh retribution payments upon the German people that led them to turn to Hitler in 1933. It was not that Hitler would have been accepted by the German people in good times showing that as an individual Hitler was not capable of changing the whole. However, we characterize this as being at the right place at the right time, which in effect means that the individual fits into a slot created by other dynamic changes and forces beyond that individual’s control within the whole.

There are always two opposing forces that coexist at all times driving the entire cyclical nature of events. Hegel’s views may make sense at the macro level, but are still a simplification of reality. There is a deeper complexity that exists and not all systems will merge into a higher synthesis. In many respects, the system at the macro level will remain in a state of swinging back and forth between these two opposing forces and there will never be a synthesis that allows a new compromised state to emerge. The synthesis will extend the life of a civilization. For example, the monarch of Britain was not discarded entirely, just stripped of any real power. The British society as an empire survived and evolved just as Rome was transformed from a Republic into an Imperial Empire. Sometimes, there is no synthesis and what emerges is total collapse.

A common example of Hegel’s Dialectical Scheme is the subject of LIBERTY. A savage has complete LIBERTY insofar as he can do as he likes, provided he is also just a nomad. He comes to surrender part of the LIBERTY in return for its opposite, to live in a collective society under rules. The synthesis emerges insofar as the savage now has greater LIBERTY in a collective society. While this example may in fact confuse the evolution of society at one level, it does not deal with how that collective state then collapses or why. Eventually, the individual is asked to give up more and more of their LIBERTY for the state is never satisfied with its present power. At some point, that denial of LIBERTY is no longer acceptable and the alternative becomes the dissolution of the state (revolution).

Hegel, correctly saw the swing between opposites that was the driving force behind the cyclical nature of history. Yet there is no permanent state of synthesis at the macro level in each instance. Eventually Rome collapsed for it lost the respect of the people by removing their LIBERTY. Once there was no longer a benefit to living within a collective society, people historically migrated.