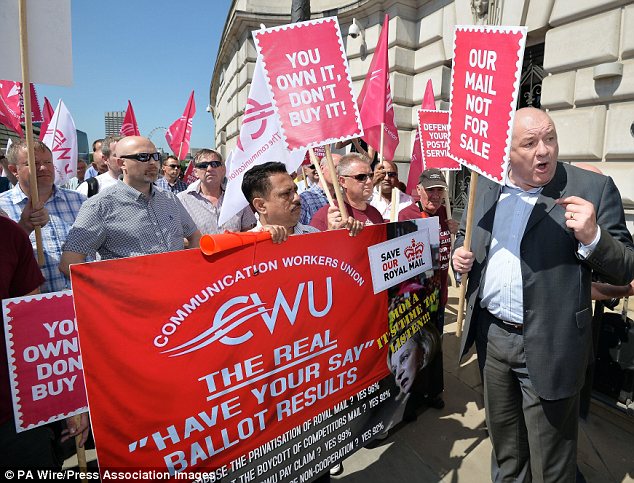 Britain is privatizing the Royal Mail because the internet has reduced the use of mail for letters. The workers are striking as always trying to freeze the economy in one place. Packages are still required, but things are changing drastically. The bulk of mail these days in the USA is junk mail. The Post Office is hopeless and it too should be floated for that will be its only hope. The pensions will vanish for it will be forced into bankruptcy, which as a public entity simply means the taxpayer must subsidize the pensions forever.

What is taking place is simply that the evolution of the economy, which is always moving with technology, is simply the way things happen. This runs the full gambit. The internet has changed everything so people rely on emails rather than letters. You can pay your bills on-line and elect paperless bank statements to assist the NSA in building its financial profile of everyone. Newspapers are read really by the older generation and as they vanish into the sunset, the younger generate will dominate making magazines and newspapers a thing of the past as they head off into the same place 45 and 78 rpm records went followed by the 8 track tapes.

Money has also changed. Stand behind a  young kid at Starbucks and they pay with Google Wallet just holding up their IPhone. Those claiming we will return to tangible money are most likely clinging to their newspapers as well. When cars appeared, the buggy manufacturers demanded laws against this new contraption. They were replaced. The funny thing about the economy, it is like the ocean – it is forever moving.

« Edward Snowden Has Still More?
Of Course there was a Deal »