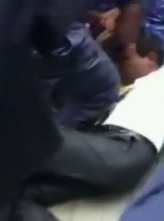 Honestly, they could make a TV series out of this instead of glorifying police. The former president Mohamed Nasheed  of the Maldives was dragged into court over corruption. He was been detained on terrorist charges, accused of ordering the arrest of a judge three years ago while still president. In London, two member of Parliament caught in a sting operation after offering their services for cash. They claim they have violated no rules.