The most serious problem we face has been the Marxist-Keynesian presumption that government is even capable top manipulating the economy. Paul Volcker in his 1979 piece Rediscovery of the Business Cycle, address this nonsense stating that effectively the collapse in the Gold Standard that was followed by the 1974-1976 Recession defied this notion about “New Economics” and its failure.

Man is incapable of controlling the economy because it incorporates everything from war to weather – things that cannot be manipulated by Congress or the Federal Reserve no less external forces. What if China decided no longer to buy US government debt and switched as they should to private corporate debt? That external shift will wipe out the best plans of men and lobbyists in Washington including the Fed.

Economics is by NO MEANS a science. It is a social coffee club where the Nobel Prize is handed out for more bullshit flowerly nonsense than all the other fields combined. In real science, you OBSERVE how the system functions and you win a Noble prize for proving a law exists. In this age of “New Economics“, we have abandoned Adam Smith’s approach of OBSERVATION, to Marx’s view that it is not fair for one person to earn more than another so lets regulate and control that. 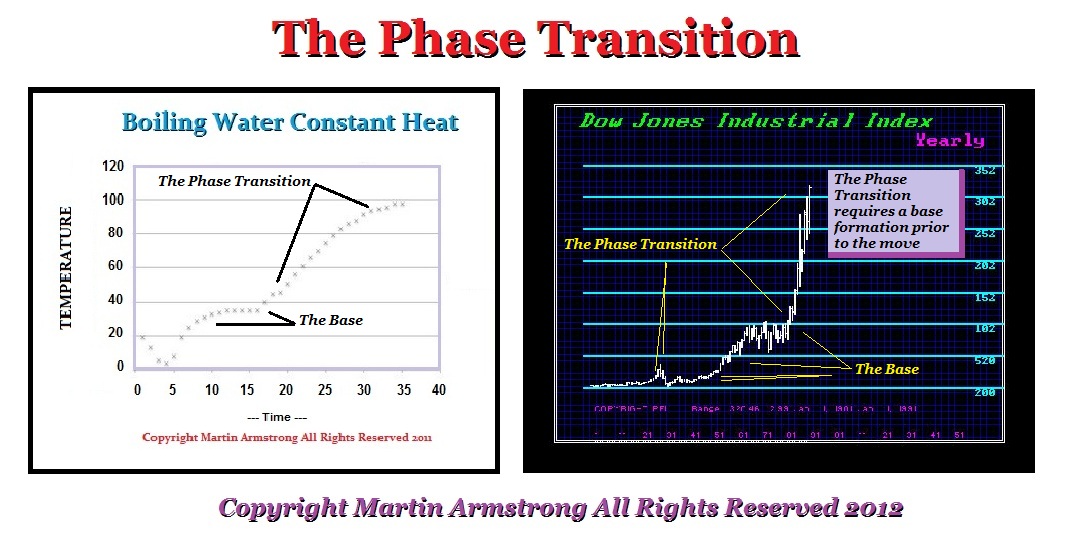 The Phase Transition is what I call a “LAW OF MOVEMENT” that takes place in everything from physics to economics. Here is a chart of boiling water compared to the Dow Jones Industrials on a yearly basis. The Phase Transition unfolds ALWAYS from a prior base. This is of course what the extreme Goldbugs hate me for. They expect only analysis that says buy – never sell and never forecast a pause no less a correction. Sorry – this is an ABSOLUTE pattern that must take place. There MUST be the pause (correction) before the exponential move upward. 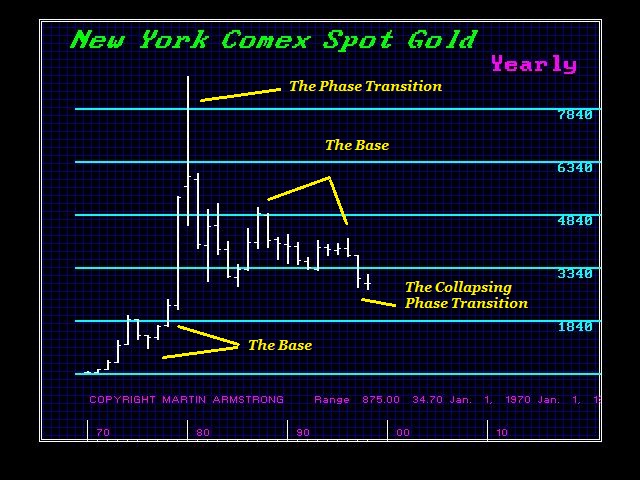 There must be the BASE that unfolds in order to create the energy for a Phase Transition. The same will develop on declines – from which the Collapsing Phase Transition will unfold. The Phase Transition is the largest possible move in the shortest compressed portion of time.

The most dangerous aspect of analysis is always personal opinion. This has been fostered due to this idea of “New Economics” meaning man can manipulate society at his desire and this opinion falls into the same nonsense. The market moves according to clear patterns and time intervals. Asia respects cycles. The West do not understand them.