Paul Volcker and the move Toward a New Bretton Woods 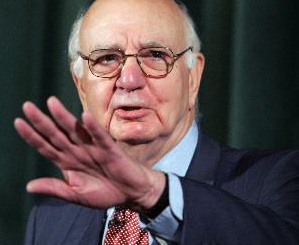 Paul Volcker spoke at the annual meeting of the Bretton Woods Committee in Washington on May 21st, 2014 (yes once a committee is forms it lives forever). His remarks offer a guide that behind the curtain there are some who see the problems we face in the monetary system, albeit not yet that from a major perspective. There is still hope that balancing budgets will somehow lead to stability and returning to a fixed peg system among world currencies, although no backing of gold.

What is critical in his lecture is the fact that the need for monetary reform exists and the who will manage that need I believe he tends to lean toward the IMF, which I would say is a mistake. Those who think the United Nations would step in I do not see as realistic for there is way too much political distrust of that many nations being involved. Volcker is still willing to see either regional currencies or even a single currency for the reserve. Nevertheless, he speaks the truth insofar as the Euro experiment has been a total disaster. He saw that the free flow of capital among the member states could not offset the lack of a central banking/bond system and the lack of the ability to control fiscal spending of each member. This goes to the heart of the problem with Europe. A unified bond market would have created a stable currency that could have rivaled the dollar but that failure left the euro a highly dangerous currency that could collapse once confidence realized there was no unifying force.

REMARKS BY PAUL A. VOLCKER
AT THE ANNUAL MEETING OF THE BRETTON WOODS COMMITTEE
WASHINGTON, DC – MAY 21, 2014

“The current travails of the Eurozone (the equivalent of an
absolute fixed exchange rate regime) carry interesting lessons.
A single currency with the free flows of funds among the member
states simply could not substitute for the absence of a unified
banking system and incentives for disciplined and complementary
national economic policies.

That is all a long introduction to a plea – a plea for
attention to the need for developing an international monetary
and financial system worthy of our time. …

What is the approach (or presumably combination of approaches) that can better reconcile reasonably free and open markets with independent national policies, maintaining in the process the stability in markets and economies that is in the common interest? …

The creation of the G-20 at the exalted level of Presidents
and Prime Ministers has been a political accomplishment. The
agreed changes in IMF governing structure are important in
achieving a sense of political legitimacy for its governing
structure and decision-making. But that is not enough – it means
little without substantive agreement on the need for monetary
reform and practical approaches toward that end.

We are a long way from that. But what can be done now is to
lay the intellectual ground work for approaches that can, for
instance, identify and limit prolonged and ultimately
unsustainable imbalances in national payments. We should be
able, within a broad range, to manage exchange rates among major 6
currencies in a manner that discourages the extreme changes that
are inconsistent with orderly adjustment. We can and should
consider ways and means of encouraging – even insisting upon –
needed balance of payments equilibrium.

Nor would I reject some re-assessment of the use of a
single national currency as the dominant international reserve
and trading vehicle. For instance, do we want to encourage or
discourage so important a development as regional trade and
currency areas?

A new Bretton Woods conference? We are long ways from
that. But surely events have raised, whether we want to admit it
or not, some fundamental questions that have been ignored for
decades. …

All that has happened reinforces what we typically affirm: a
strong, innovative and stable financial system is fundamental to
open trade and to the prosperity of all nations. Participation
in such a beneficial system that has become truly international
implies certain responsibilities.  …

Can we not, in approaching that challenge, restore
something of the spirit and conviction that characterized the
planning, the negotiation and the management of the Bretton
Woods System that I once knew 50 years ago? Our host today, the
Bretton Woods Committee lights the candle, but we have a long
way to go.