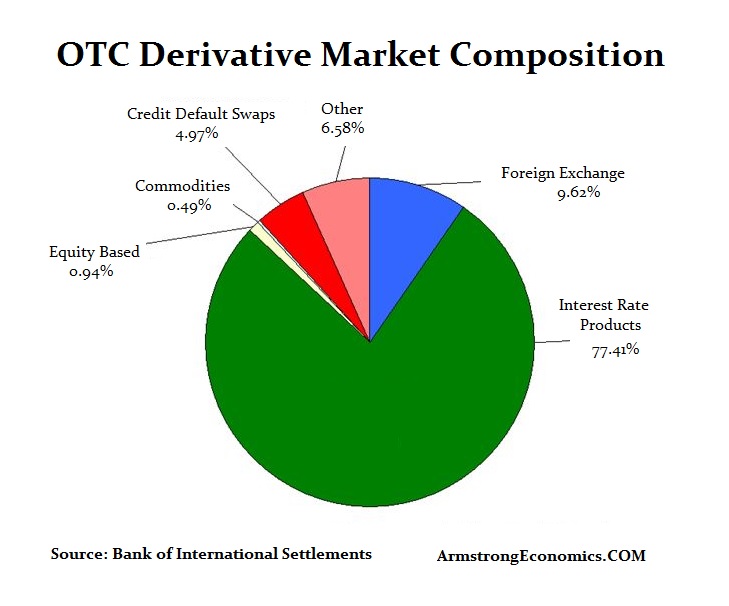 Enjoyed the Solutions conference and am looking forward to the October conference.  There was no mention of the over the counter derivatives market.  Would a debt to equity swap trigger the swaps creating a much larger problem then the current outstanding debt?  Didn’t they try doing a voluntary default with Greek debt before hoping that it wouldn’t trigger the default swaps but it was later ruled that it would technically be a default so they canned that idea?

Is the $700 trillion or so of OTC derivatives a big problem or not?

ANSWER: That portion related to sovereign debt will most likely be closed out at the market. Keep in mind that they wiggled out the Greek liabilities arguing that they covered only a 100% default, not partial haircuts.

The problem with the OTC derivatives is the declining liquidity. That is the real crisis we face – the flash crash the other side of 2015.75. That may force political change. But I do not think politicians will be able to shoulder the banks this time. Tucked in the December bill was language that authorizes bail-ins. The political heat may be way too hot to bail out the banks again with a trillions dollars.

Many people tout this as if the entire market is some single unfunded liability. The bulk of this is hedging – insurance. It is offset against something else. The problem is not that the entire market collapses. this reflects leverage true, but this merely will increase volatility tremendously as things are offset and market-makers are not willing to make markets.