Obamacare Deliberately Written with 33,000 Pages of Regulations To Hide the Truth

Everyone is shocked that the Key Obamacare Architect, Jonathan Gruber, has come out and admitted that the Obamacare legislation was drafted to intentionally be so confusing that the average American public would never know that their healthcare would rise in price and decline in service. Here is the full transcript and a link to the video:

“You can’t do it political, you just literally cannot do it. Transparent financing and also transparent spending. I mean, this bill was written in a tortured way to make sure CBO did not score the mandate as taxes. If CBO scored the mandate as taxes the bill dies. Okay? So it’s written to do that,” Gruber said. “In terms of risk rated subsidies, if you had a law which said that healthy people are going to pay in, you made explicit healthy people pay in and sick people get money, it would not have passed. Lack of transparency is a huge political advantage. And basically, call it the stupidity of the American voter or whatever, but basically that was really really critical to get for the thing to pass. Look, I wish Mark was right that we could make it all transparent, but I’d rather have this law than not.”

People do not understand the biggest legal trick of all. When you write legislation or produce documents to a subpoena, you overwhelm them with so much verbiage or documents that nobody will bother to read it and cannot possibly sift through everything. That allows them to hide the evidence so deep nobody will find it. This is what Goldman Sachs did to Congress during the Financial Crisis. “Angelides announced on June 7 that the FCIC had subpoenaed New York-based Goldman Sachs, claiming the company tried to hinder a probe by overwhelming the panel with documents and resisting attempts to interview managers including CEO Lloyd Blankfein.” (see Commission Report). This is what Obama did with healthcare. You will have higher costs. tax whatever they determine is a minimum threshold to increase taxes, and then your premium will soar. 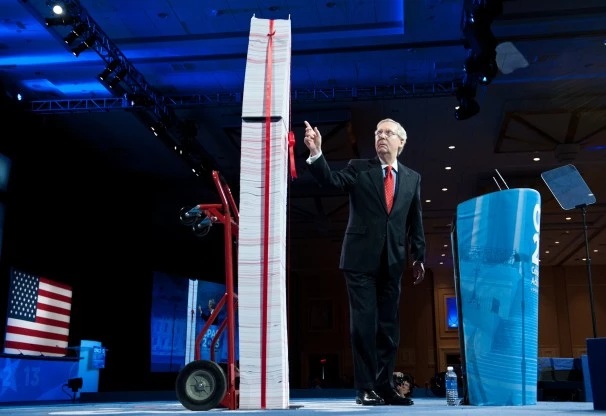 Social Security was written with just 16 pages. The Patriot Act final bill was 342 pages long and changed more than 15 existing laws. Obamacare is the bury-em deep tactic so nobody understands what they did. We have got 33,000 pages of regulations that they’ve already written. If we stacked it up here, it would be seven feet tall. This is the largest piece of legislation in history and it should be totally repealed as a poison pill. Of course, the left-wing communists that run MSNBC can never see anything bad if the Democrats pass something. If a Republican did this, they would be all over it. The sheer tactic of size is deliberate deception and that says it all. Beware of the fine print.

What is the truth this is hiding? The fact that you get less and the hospital gets more.

« The Future – Desolation or Disneyland?
Beware the Cycle of War Turns Back Up Next Week »