Obama Turning Man Against His Brother until Man Exists No More

Back in 1929, the then US Secretary of State Henry Stimson closed down his department’s code-breaking office because, he said, “gentlemen don’t read each other’s mail.”  The end of a society historically is marked by paranoia. MSN reports on Obama orders government employees to spy on each other. What Obama cannot grasp is once you begin to turn everyone against everyone else, everything is completely lost. Obama is now recreating the Venetian Mouth of Truth and this is one of the final straws before a major collapse.

I went behind the Berlin Wall before it fell. A friend on mine was born in East Germany and the day they put up the wall he happened to be walking with hid grandmother on the other side of the street. He wanted to visit his family trapped behind the Wall. He had become an American, but he was not a born American. The rumor was if they found out he was born in East Germany, they would keep him. So he wanted to go with a natural born American. I said yes, because I wanted to see what was true and what was not. 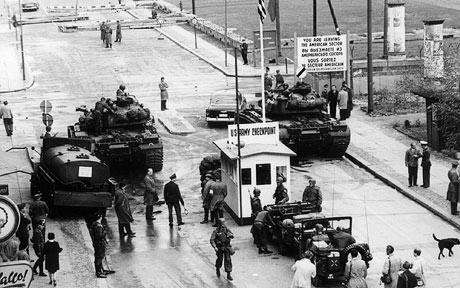 I walked through Check Point Charlie. That was an experience all in itself. You had to buy East German marks one for one with West German, but inside, not even the government would accept its own currency. The greatest trait of the Secret Police was they had turned everyone against everyone else. If anyone was within hearing distance, my friend’s cousin would praise the government. As soon as we were alone, she would curse the government and the people.

The Stasi were the most notorious secret police in history. A friend grew up in East Germany. When the Wall Fell, the extent of the Stasi then came to light People found their apartments were bugged and ALL their so-called friends were reporting to the government on them. This is precisely what Obama is doing to the American society. At train stations there are posters saying IF YOU SEE SOMETHING SAY SOMETHING. Now Obama is doing the same thing inside government. What these people do not understand, one you turn man against his brother, there is nothing left.