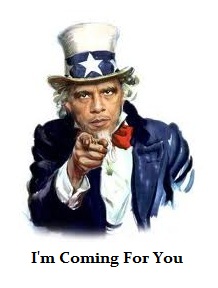 Obama wants MORE tax increases and no spending cuts. This man is totally insane. He must have taken the little bus to schools because his logic is anything but logic, and his observation powers are myopic for he cannot see what France is doing. His constant insane rantings against anyone who has money should cough it up rather than he reduce a single dime in spending is nuts. All the job cuts will be in the PUBLIC sector. About time! The average family REQUIRES two incomes because they have to support a 45 year old orphan they never raised but insists they must pay him because he wants to retire. There is a government employee for every family! They use to raise money asking you to adopt a poor child in a foreign land. Hey – we did that, but we kept it home! Obama said:

“If Congress allows this meat-cleaver approach to take place, it will jeopardize our military readiness. It will eviscerate job-creating investments in education and energy and medical research,” Obama warned in a speech at the White House, flanked by emergency workers. “It won’t consider whether we’re cutting some bloated program that has outlived its usefulness or a vital service that Americans depend on every single day.”

Everything the government does could be done a hell of a lot cheaper if it is even necessary. There were 7 agencies all regulating the banks that ALL approved the mortgaged backed CDOs. Who needs this shit? Merge the SEC & CFTC. The UK and everyone else has one agency. We have one agency for every flavor of ice cream.

Obama has repeatedly called for a blend of spending cuts chiefly affecting entitlement programs like Medicare and new tax increases achieved by targeting loopholes that chiefly benefit the wealthy and rich industries. How about this – tax the trading PROFITS of banks regardless where they make them in what subsidiary  Leave the little small business man alone who just so happens to employ 70% of the civil work force. Oh – sorry, the bankers are always exempt. They are not the “rich” nor the “super rich” they are the Illuminati that sell the debt and provide light to Washington.

These people are just insane. They will utterly destroy everything and lead to massive civil riots when the people cannot pay for all the promises Obama and his predecessors made to government workers for decades. Government workers, by the way, are PUBLIC SERVANTS for they do not produce anything toward the wealth of a nation – they only consume. They are no different than if you hired a maid. You pay her to make your life easier, but she does not contribute to household income – she consumes it. Government employees are the same – they cost a fortune.

Townships with police retiring after 20 years of service at 45, now have to pay them almost the same as if they were working. Now they have to hire a replacement yet still pay the last one. Guess what! The cost of government employees is DOUBLING over the next 10 years. We have reached the breaking point. Perhaps we should all send a small mirror to everyone in Washington writing a note on it – It’s you!

« No Government Has Ever Survived a Debt Crisis !!!!!
The Untold Story of American Women Raped by Government »